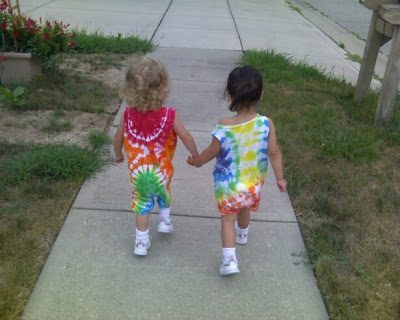 I'm loving that lately the girls have been super obsessed with each other.  It's actually rather cute as long as both of them are into it.  More often than not....Addison wants to hug Alexis and Alexis wants no part of it or vice versa.  This evening they couldn't get enough of each other.  It melts my heart that they are growing up to be best friends!!!  I just love these two to pieces!!!
Posted by Janet at 8:14 PM 3 comments:

What the hell was I thinking?

So, as many of you may already know (since I'm so late in blogging), we attempted our first family camping trip over the fourth of July weekend.  Many months ago, some friends of ours called and asked us if we would be interested in joining them on a camp out for the weekend.  Terry and I discussed it and thought, why not?  Maybe we should have discussed it a little more!

Terry headed out with his friend Friday morning and I was in charge of bringing the girls out by myself on Saturday afternoon.  Long story short, the girls screamed almost the entire 90 minute drive out to the campground.  Once we got there they were fine.  We swam a little bit, played at our campsite and just enjoyed the very hot, but none the less, beautiful day.


Here are a few pictures of camp....
Did I mention it was really hot?  You can tell by my shiny face and how tight Addison's curls are.
Alexis liked climbing into the big people chairs.
We also brought the girls little picnic table thinking they would play on that.  Not so much!
And then came bedtime.  The girls were not having it!!  After two long hours of trying to get the girls to go to sleep, I made the executive decision  that I was just going to head back home.  They had been crying (like crying & screaming hard) for almost 45 minutes straight and I couldn't ﻿handle it anymore.  Alexis almost immediately passed out in the car.  Addison cried for about 15 minutes before zonking out.  About half way home, both girls woke up and screamed for at least 20 minutes.  This was the most stressed I think I have been with the girls in a long time.  Being alone with the girls in the middle of the night, was enough to make me thankful that I'm not a single parent raising these kiddos by myself!!
So,  the girls and I spent the weekend at home and Daddy stayed at the campground.  It was nice to spend some alone time with the girls by myself, but we were all happy when Terry came home Monday afternoon.  Sadly, we also didn't get to show off our cute little 4th of July outfits.
Lex running away from me so I won't take her picture.  This is the best one I could get of the monkey.
Tried to sneak in a quick pic while they were captivated by something on TV.
Addison's new favorite thing is to show you her muscles.
So, I'm pretty sure that I can say that we won't be attempting another camping trip for quite some time!  As with all things, we operate on a trial and error basis.  This one goes into the huge FAIL category!﻿
Posted by Janet at 1:19 PM No comments: