Anything can be a toy!

I love how my girls have wild and crazy imaginations.  They can turn even the simplest of items into a toy.  Lately they have been coming up with the craziest things.  We recently did a mini basement makeover.  Due to some financial limitations we weren't able to complete it the way we were originally planning.  Regardless, we decided that it was 100% necessary for the girls to have their own playroom.  Walking through our living room without stepping on a toy or tripping over something was becoming a challenge.  We were able to purchase some large carpet remnants for cheap at a local hardware store.  They came on large rolls.  The girls played with these empty rolls for hours.  At first they were just yelling into them.  Then they became bridges.  Then super, duper magic wands.  Towards the end I lost track of exactly what they were doing.  I love watching their little minds work! 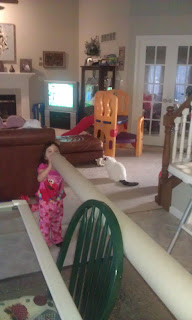 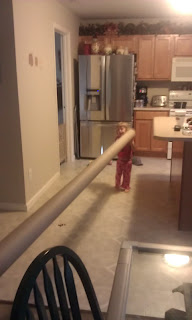 I apologize for the picture quality.  They were taken on my cell phone.  I'm still waiting for our computer to be fixed so I can actually download some real pictures.

I'm so glad to have our mini remodel almost complete.  The slide pictured in the above picture has since moved to the basement.  I can't even tell you how excited I am to no longer have slide in my living room!  We still have a few rather large projects ahead of us.  As you can see in the bottom picture, we are about to embark on painting our entire first floor....the only downfall of having a large open room.  There are a few paint samples on the wall.  Now it's just a matter of picking one and moving forward.  You can also see in the bottom picture that we are in the process of upgrading our appliances.  So far we have a new dishwasher and refrigerator.  Those both crapped out so we were forced to get new ones.  I'm ok with having mis-matched appliances for awhile.  This gives us the opportunity to save and purchase the ones we really want.
Posted by Janet at 11:36 AM No comments:

I am so far behind on my blogging lately.  I feel like there is so much that I need to catch up on.  Easter, the girls birthday party and just the other random things happening in our household lately.  I've recently also realized that I never completed my blog post about Christmas.  UGH!  So much to do...so little time!!!
Last Friday (April 20th), the girls had their 3 year physicals.  I know I say this all the time, but it is still so surreal to me that they are already three years old.
As usual, my girlie's did awesome.  Their pediatrician was extremely delighted in their progress.  She kept saying that she is so shocked as to how well they are doing.  We are too!
Addison currently weighs in at 24.6 pounds.  Just barely scraping the chart at the 1% mark.
She is 35" tall.  Coming in at around 15%.
Still a tiny little thing but the doctor isn't worried.
Alexis currently weighs in at 25.8 pounds.  Right around the 4% mark.
She is just a little tiny bit shorter than Addison at 34 3/4" tall.
The girls were excited to use the "big girl" scales and measuring charts.  No more baby stuff!!
Here are a few pictures from our appointment.... 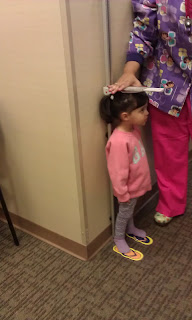 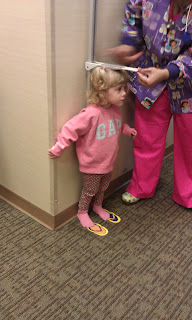 Getting them to stand up straight against the wall was a little bit of a chore. 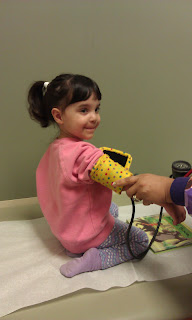 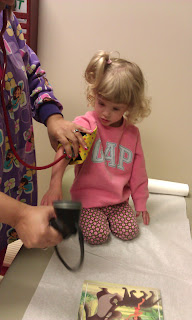 The girls thought the blood pressure cuff was rather interesting.  Our nurse Michelle told the girls that she was measuring their muscles to see how big they are.  Alexis totally into it.  Addison was a bit more skeptical.
I still can't believe my tiny babies are three years old.  Where did the time go???
Posted by Janet at 10:30 AM 1 comment:

How is it possible that my tiny little babies are now three years old?  It just doesn't seem right!  I love these little girls more than words can ever express.  They make me a better person, and I'm so blessed to have them in my life!! 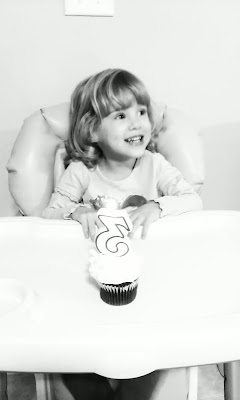 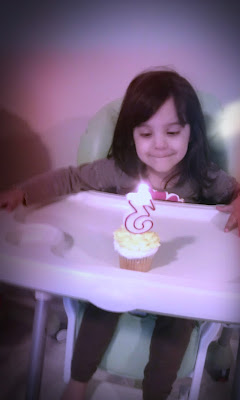 I will do a full post later this week...
The girls have their three year physicals on Friday and their birthday party is on Saturday.
Posted by Janet at 10:05 AM 2 comments:

It's been awhile since I have posted.  Our computer at home crashed and we've been looking for something new to replace it.  We keep going back and forth between a tower, laptop or Ipad.  Until then I won't be able to download all the fun pictures I want to share.  So, I've decided to do a little hodge podge posting with a bunch of random pictures from my cell phone. 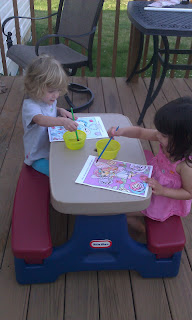 The kiddos outside painting. 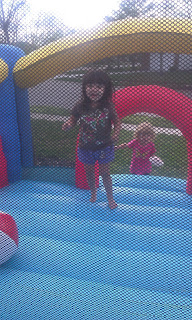 Alexis jumping in her bouncy house.  Addison somewhere in the background. 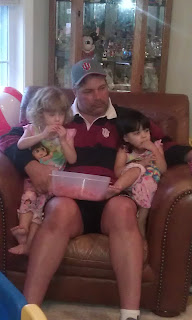 Love this picture.  I wish it wasn't blurry.  The girls are enjoying a watermelon snack and a little Dora the Explorer before bedtime. 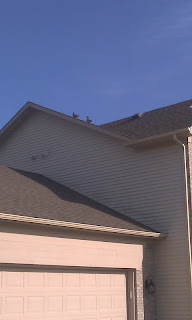 About a week or so ago the girls and I went outside to go for a walk.  Alexis started laughing hysterically and pointing at the neighbors house.  I look over to find these two ducks just chilling on her roof.  The ducks hung out up there for over an hour.  Every time we go outside now, Alexis will check and see if the ducks are back on the roof. 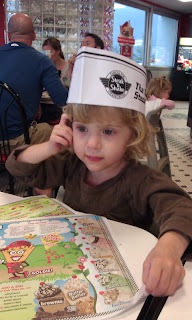 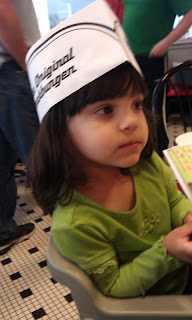 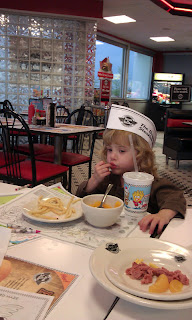 One day last weekend, I didn't feel like cooking dinner.  I had a gift card to Steak 'N' Shake so we ate there.  The girls thought the paper hats were hilarious.  Addison loved their "baby french fries" and keeps asking for them.  However the girls did NOT love their hot dogs.  Rather than being boiled, they were fried on the grill.  You can see the spit out pieces in the above picture. 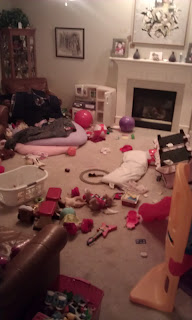 No one ever believes me when I say my house looks like a tornado just blew through it.  I came home from work the other day to this.  Needless to say....since this day, we have been focusing on cleaning up and putting away toys before you get another one out. 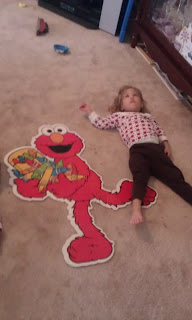 Addison said her Elmo puzzle is as big as her. 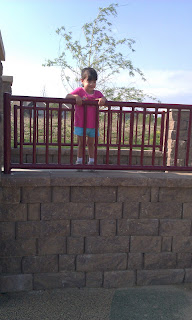 Alexis having fun at the park. 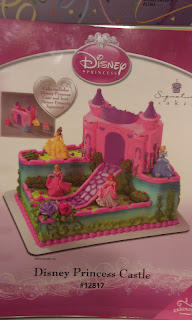 I just ordered the girls birthday cake.  I seriously can't believe it that in less than 48 hours my little munchkins will be three. 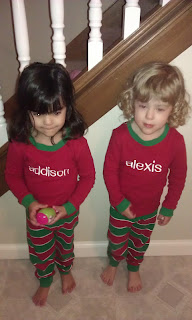 Anyone notice anything wrong with the above picture?  Does it make me a bad parent that I didn't even notice until the next morning??  And seriously they don't always look like little rag dolls.  I had just taken their pony tails out of their hair leaving them with that awful scrunched up look. 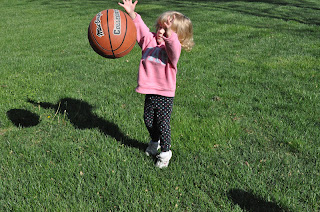 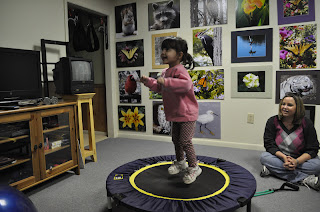 Another Sherri picture....Alexis playing on the trampoline at Sherri's house.
Posted by Janet at 1:49 PM No comments: