Both girls are continuing to do well. Not much new to report as we have just been trucking along. Terry is in Chicago this weekend, enjoying a Cubs game with one of his buddy's so my Mom came out from St. Louis to provide back up. She helped me take the girls to the pediatricians office on Wednesday just for a weight check and general check up.
Addison is currently tipping the scales at 7 pounds 10 ounces. She's generally our mellow baby and just goes with the flow. She seems to be more alert lately and is always so bright eyed! We are still trying to figure out where she gets her blonde hair and blue eyes from. Terry is still threatening to take us on the Maury show for a DNA test.
Alexis is weighing in at 7 pounds even. Alexis had been spitting up ALOT. (Hence the reason for lack of weight gain) She actually did projectile spit up while we were at the doctors office. The doc finally gave us some medicine for her acid reflux. WOW, what a difference!! She has been a lot more calm and hasn't been as restless.
Mom and I decided to take the girls for a walk this evening since it has been such a beautiful day. Sometimes we just got to get out of the house for a little bit. Since it was still pretty bright outside, I tried to put on the girls sunglasses. Addison would only wear hers for a few minutes and Alexis didn't really want any part of it. Yes, I realize that the glasses are too big, but they looked adorable in them. See below pics. Addison is on top and Alexis is on the bottom. 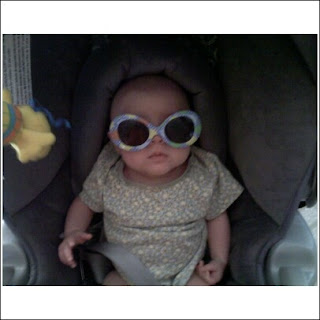 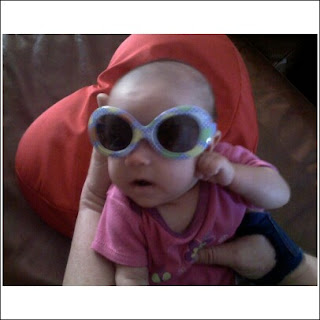 love the sunglasses, Kings always eats her when I try putting them on her.

Adorable. Hope you are enjoying the time with your mom and the girls:)