I'm sure that many of you remember from my previous posts my friend Jody and her baby boys, David & Derek.  Both David & Derek came home from the hospital mid August. David was sent home on oxygen and monitors.  See below picture of the boys, David on the left & Derek on the right... (I hope Jody doesn't mind that I stole them from her website!!) 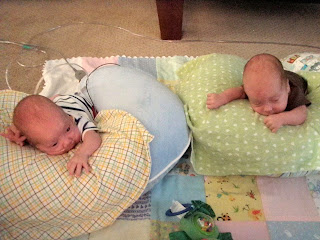 Long story short, I got a text message from Jody on Friday afternoon saying that she had just performed CPR on David and was going by ambulance to the hospital.  I spoke with Jody on Friday and she told me that David was grey, had no pulse and wasn't breathing.  He had aspirated on something and stopped breathing.  Luckily Jody caught it in time and was able to perform CPR with her husband.  They kept David overnight at the hospital for observation and released him on Saturday morning.  (See below picture of little David) 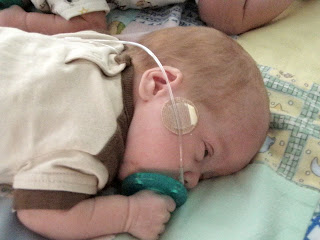 Well, this morning (Tuesday) I get up and start getting ready for work.  I looked at my phone just to check the time and saw that I got a text message from Jody at 12:03a.m. (which would be 9:03pm her time).  The text said that she was back at Kaiser (the hospital) with David.  He was pale and the alarm on his monitors went off.
Please keep Jody, John, & David (and Derek too!) in your prayers.  Please pray for Jody & John to find strength during this difficult time.  I could sense in Jody's voice when I talked to her Friday that she was not only worried but was feeling a little beat down by her continued struggles with her little dudes.  Please pray for David to fight whatever battles he is dealing with right now and to continue to grow healthy and strong.
Posted by Janet at 10:13 AM

Definitely saying a prayer. How scary.