Many of you already know that we took the girls to get a family picture taken on Saturday.  On Thanksgiving I realized that this may not have been the smartest idea.  Taking two infants to the mall the weekend after Thanksgiving, What was I thinking?  I seriously stressed about finding parking, getting the girls dressed and making sure that we were at our appointment on time. To my suprise, we found a front row parking spot and the girls did super!!  I will definitely know for next year that we need to schedule our appointment prior to Thanksgiving or on a week day!  The portrait studio was packed but luckily we had an early appointment so they were still relatively on schedule.  By the time we left they were already running behind by about 45 minutes.  I'm fairly postive that it's our fault that all the appointments after us were postponed, but all and all things went great.  Some pictures turned out great and some pictures well, not so much.  Here is a sneak peak of a few pictures that will not be making the cut for our Christmas card. 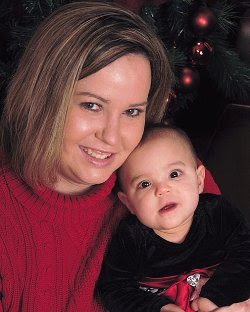 Above:  Me & Alexis.  I LOVE this picture!  Unfortunately, I'm limited to the number of pictures I can put on our card.  I love this picture of Alexis because it truly captures the essence of her sweetness when she's in the right mood.  Nicknamed the "Beast", we don't get many of these sweet moments captured on film! 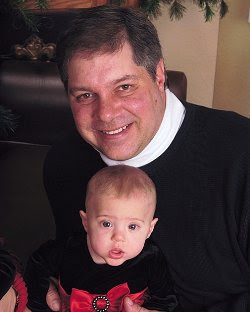 Above:  Daddy and Addison.  Another one of my fav's that isn't going to make the Christmas card cut.  Addison wasn't truly feeling the photo shoot.  Afterwards, I realized that she was totally sweating in her little dress and that was probably what her issue was.  I just think this is a great picture.  It truly captures the way that Terry lights up any time he is around his girls. 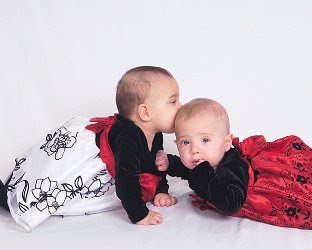 And the final picture not making the cut, Above:  Alexis in white & Addison in red.  Ok, so it appears that Alexis is having another sweet moment by kissing her sis on the head right?  Not so much!!  Alexis likes to try and bite Addison's head or chew on her hair.  But in my opinion it's still super adorable.  These are the moments at home that I can never capture on film so I'm glad that we were able to get a few candid shots.

So stay tuned in the next month or so to see the best of the best and our first family Christmas card!!

Also, big THANKS to Grandma & Paw Paw Flanigan for helping us out this weekend!  We couldn't have made our photo appointment on time without them!

What?! These are the ones that are not making the cut?! The other ones must be amazing..

The trick to the photo studio is, like you said, go on a weekday and be the first appointment. I always spent soo much more money that I ever planned on spending in those dang places. However, I must say, I don't regret any of it!!

Hope the girls had a great Thanksgiving!

Your pictures are great! I absolutely love the one of both girls laying on the floor. How sweet!

Thank you for stopping by my blog today, for watching Shawn's video, and for leaving me a comment. It means so much to me.