Better late than never with my Thanksgiving post right?  Actually, I have an explanation as to why I'm not posting it until now.  I didn't really feel comfortable with posting on the internet that we would be out of town and that our house would be empty for intruders to easily access.  Yep, that's right.....we were brave enough to embark on our first official road trip with the munchkins.

We decided that it was time for us to make the journey to visit our family out in the St. Louis area.  After two weeks of pre-planning and packing up just about everything but the kitchen sink, we were ready to roll.  We left Thanksgiving day, promptly at nap time, with hopes that the girls would sleep in the car.  Once again, I seriously stressed about the girls being able to contain their little wiggle-worm bodies in their car seats for four plus hours.  And once again, my kiddos surprised me with their amazing resilience and ability to adapt to different surroundings.  About forty five minutes into our trip this was my kiddos.... 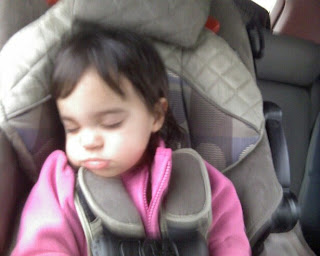 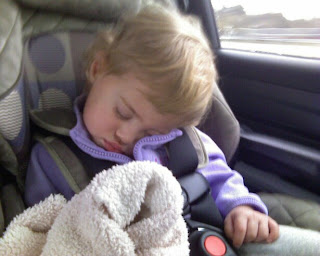 Sadly these are the only two pictures that I took our entire trip :-(
They slept very well for a little over an hour.  Then it was Barney time.  As much as I despise Barney, he saved us on this drive.  Prior to our trip, we installed a dual screen dvd player in the SUV.  The girls were pretty excited to be able to watch Barney & Elmo in the car.  ﻿All but the last twenty minutes of the trip the girls were fairly content.
Once arriving at Grandma & Grandpa's house the girls were in heaven.  They couldn't decide what toys to play with first, or what picture to rip off the shelf first.  The girls were excited to have free roam of the house and to be free to explore their new surroundings.  Again, I seriously stressed about whether or not the girls would sleep well away from home.  They have never spent the night anywhere except in their own cribs.  And as I should know by now....they amazed me with their adaptability.  Both girls went right to bed every night.  Alexis would cry for all of thirty seconds before going to sleep.
Now the trip home.....UGH, where to begin.  Let's just say the trip home didn't go quite as well.  We tried to follow the same routine that we did on the way to St. Louis, with hopes that the girls would take a nap in the car.  About twenty minutes after we left Grandma's house, Addison started vomiting in the car.  I told Terry to pull over, thinking that I could just clean her up and we would be on our way.  Nope, not so much!  As soon as we stopped Alexis started gagging and throwing up everywhere as well.  I'm not talking just a little vomit.  I'm talking serious projectile vomit covering every inch of their clothes, their car seat, their hair, the seat of the car, etc.  At that point we decided to turn around and head back to Grandma & Grandpa's house.  I gave Terry the option of either (A) Taking the girls into the house, stripping them of their vomit soaked clothes and giving them a bath or (B) cleaning up the car and the girls car seats.  To my surprise, he chose B.  So, long story short, after about an hour and a half delay cleaning the girls, the car and ourselves, we got back on the road.  The girls almost instantly fell asleep and took a great nap.
After nap time, the girls once again showed their excitement to be watching movies in the car.  My crazy sister Paula, was out early on black Friday (no thank you!) trying to score some deals.  She picked up a few dvd movies for the girls, including Beethoven.  The girls seriously were in love.  For about an hour or so, all we heard from the front seat was.....dog, dog, DOG, big dog, and DOOOOG!  All but the last forty five minutes of the drive they were pretty content.  I had to get pretty creative with some of my singing, and tossing of stuffed animals, and pretty much just acting like an idiot to keep them entertained.
After arriving at home, we were pretty much convinced that it was just an isolated car sickness issue.  Well, that was until Alexis woke up about thirty minutes after going to bed.  I was rocking her in our chair and I could see it in her face.  Yep, I got pelted with projectile vomit.  I'm pretty proud of the fact that I saw it coming and that I was able to position her where I took the brunt of the destruction and she didn't need yet another bath.
All and all most of our first road trip was amazing and my girls yet again continue to impress me.  I'm so thankful for those two little munchkins that I can't even put it into words.  Yes, being covered in puke is super disgusting but I'm thankful that I Addison and Alexis in my life that I wouldn't change a second of it.  They make me a better person, and I thank God everyday for blessing me with those sweet little angels.  I'm also grateful for everyone in our life who continues to support us.  Our parents and families, for constantly being there for us whenever we need them.  Terry's sister and brother in law, for continuing to feed us clothes from their adorable twin girls.  Our friends and neighbors who continue to be an amazing support system.  The mysterious Angels in our lives who randomly drop off boxes of diapers on our front porch.  Whomever you are, thank you! And everyone in our lives who has ever said a prayer or supported our family in any way.  It would be impossible to name everyone individually.  For all of you, we are thankful.
"Give thanks to the Lord, for he is good; His love endures forever."
Psalm 107:1﻿
Posted by Janet at 10:22 AM