I came home from work yesterday to find this on my kitchen table..... 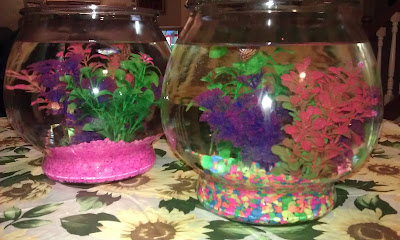 Terry has been talking about getting the girls fish for awhile now.  I wasn't necessarily opposed to it, I just don't need anything else on my plate.  Granted they are only fish and don't require a lot of care, but I just don't have time to take care of anything else. 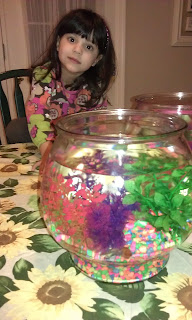 The girls were super excited to show me their new pets.

From what I understand, Terry was going to originally buy one fish bowl with two fish.  Then Addison had a melt down in the store demanding her own fish bowl.  If this was me, I wouldn't of caved in.....but Daddy is a pushover!  Each girl got their own fishbowl and picked out their own rocks.  Alexis picked sparkly pink rocks (you can see in the first photo) and Addison picked multi-colored rocks.

So, the new plan after Addison's melt down was each girl was going to have their own fish bowl and their own fish.  Then Alexis began to worry that her fish would be lonely by itself.  I love her big heart and concern for everyone.  So again, being the pushover he is, Daddy bought two fish for each girl. 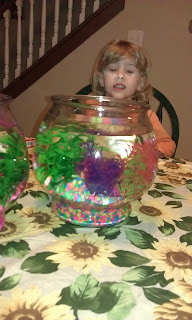 I asked the girls what they decided to name their fish.

Addison has chosen:  Lobster and Scarecrow as her fish names.

Alexis has chosen:  Goldfish and Bubble Guppie (like the cartoon fish) as her fish names. 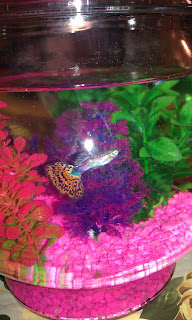 As I was getting ready for work this morning I noticed one of Alexis' fish looked a little lethargic.  I didn't mention anything.  The girls had another snow day today so they were still sleeping when I left for work.

Several hours into my work day I got a call.....it appears that Alexis' fish, "bubble guppie" has decided that he is very sleepy today.  Alexis told me on the phone that her fish is taking a nap.

Since having these fish was all Terry's idea....I told him that it was his decision on how to discuss the whole "nap" situation.  He has decided that since the fish have been in our home less than 24 hours, the fish will continue to be napping until he can be replaced later this evening.

Here's hoping the replacement can make if more than 24 hours!!!
Posted by Janet at 1:29 PM