It was bound to happen sooner or later....

So last Friday morning (June 17th, 2016), shortly after 9:00am, I got the dreaded phone call from the camp counselor.... "Alexis fell and her arm is crooked".  I couldn't get to her fast enough.  Trying to reach Terry the entire drive with no success.  It seemed like I hit every stop light red and the traffic was heavier than normal.  On my way I was trying to process what to do.  I called pediatricians office knowing that they have an x-ray machine on site.  They know us there (from all the preemie visits) so the receptionist told me to head straight in once I picked her up.  I continued to try and reach Terry with no luck.  I called his mom and explained the situation.  She drove to our house and found Terry.  One major downfall of having a deaf husband is that he can't hear the phone ring.  He eventually met us at the pediatricians office.

Once I reached the summer camp and saw Alexis, I knew immediately that her arm was broken.  I just didn't know the severity.  We carefully strapped her in her seat belt and headed to the doctor.  She cried briefly for maybe two minutes because of the seatbelt.  Luckily it was only a few miles away.  We checked in at the front desk and were taken back to a room within minutes.  The doctor ordered x-rays immediately.  The kid who took the pictures showed them to us saying "dang, she did one heck of a job".  That was when I knew it was bad! 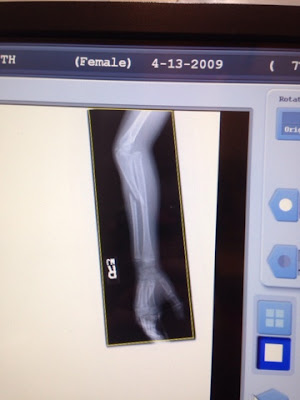 At this point it was right around 10:30am.  Alexis was given some children's Advil for her pain.  The pediatrician called me into the hallway to discuss things.  I knew things were going from bad to worse at this point.  Our doc always has every discussion in front of the kids.  She thinks it is important for the children to understand everything and to keep them well informed.  She told me that Alexis had broken her Ulna in a way that had also dislocated her elbow joint and would need surgery and soon!  She was in the process of consulting with several ortho doctors around town.  Unfortunately, several of these offices were closing at noon that Friday.

She finally was able to get ahold of the ortho doctor the her children also see.  She sent us over to his office for a 1:00pm appointment.  We were also advised not to feed Alexis because surgery was imminent.

We made the trek across town to Peyton Manning Children's hospital where the ortho doctors office is housed.  We were seen around 1:30.  The doctor shortly entered the room and was shocked that Alexis' arm was not splinted.  He immediately put on a temporary splint.  He was amazed at how well she was doing and how she was still smiling despite the amount of pain she must be in. 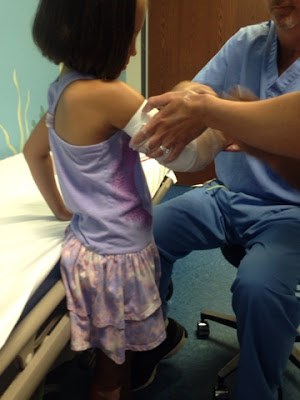 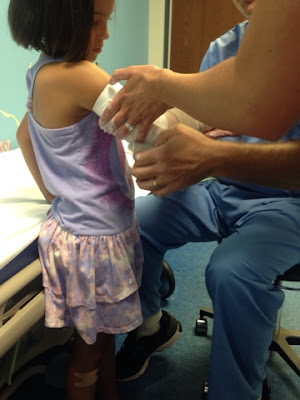 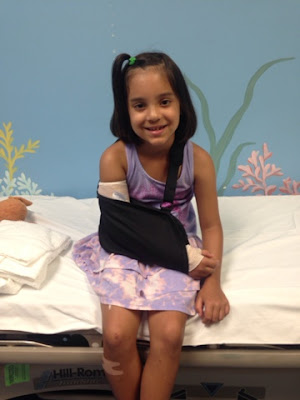 We had a twenty minute conversation with the ortho doctor regarding the surgery.  We discussed all the details, the need for a pin to be placed in her elbow, all the possible issues etc. etc.

We were told that surgery would be roughly around 4:00pm.  We were taken over to the outpatient surgery area.  We filled out numerous forms, disclosures, etc.

Alexis' arm was marked.....This she absolutely hated!  Everyone explained to her why it was necessary, but in the coming days she hated it because we couldn't get it off. 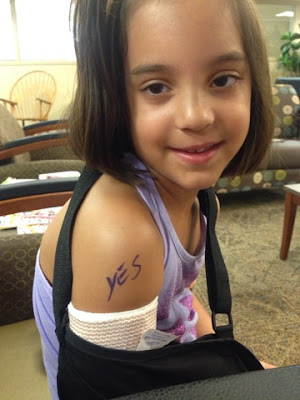 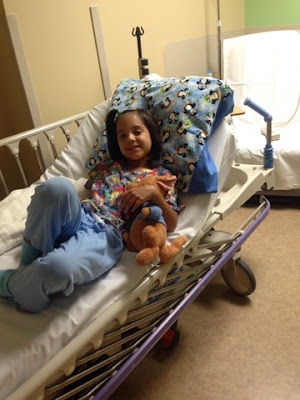 Despite all the waiting, Alexis' only complaint was that she was starving.  She hadn't eaten since 8:00am.  At one point she did cry because she was uncomfortable.  This being only the second time she cried all day.  She was such a rock star all day long!


During our waiting....Terry and I told Alexis that once she was better that as a family we would go out to dinner anywhere that she wanted to go.  Alexis said she wanted to choose the Italian restaurant that we ate at in Disney World.  We quickly had to firm that up, with "anywhere you want within a 30 minute drive from our house".


Our 4:00ish surgery time came and went.  Around 5:00pm we were told that it was shift change and we had to wait for a new team of surgery nurses to clock in.  Then we were told that there was only one anesthesiologist working that evening.  Later we found out that Alexis' surgery was bumped due to a motorcycle trauma.


Finally around 7:30pm Alexis was wheeled back to surgery.  Thus commencing only the third time she cried all day long.  She didn't want us to leave.  That's when I absolutely lost it.  Luckily her surgery was fast!  I was able to watch the automated board and see step by step the progress of her procedure.  We were told it would take about an hour...It was only about 40 minutes.


I met with the ortho doc and he said that the surgery went well and that she did amazing.  He was pleased with how everything went and that we should schedule a follow up for two weeks to see her progress.  The doc told us that Alexis was still sleeping and a nurse should would take us back to see her shortly.


About 30 minutes later we got to see her.  She was awake but very loopy.  Literally five minutes after we were taken back, Alexis was changed into her regular clothes and we were pretty much booted out of the hospital.  No joke!


While Alexis was getting changed, we found Roo Roo tangled in her hospital blankets.  Roo also underwent surgery!  Alexis loved this!! 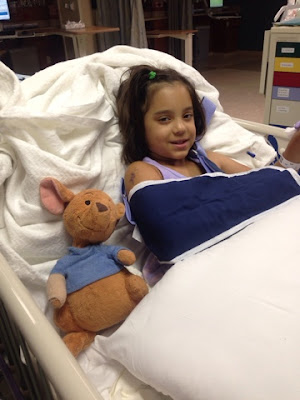 By this time it was after 10pm.  The doctor had written a script for pain meds which he advised we most definitely get filled asap!  Because of the late hour, I had to find a 24 hour pharmacy.  There are really only two somewhat close to us.....one being right next to the hospital.  So we stopped filled her rx and headed home.  We gave Alexis a dose of pain meds and put her to bed.


She woke up around 4:00am wanting to get up and get her day started.  She crawled in bed with me and went back to sleep for a few hours.  After a few more hours rest, we got up had some toast (we were advised to go easy on food for 12 hours) and then tried to figure out how to take a bath (she was pretty dirty from camp still).  I'm glad we did the bath early.  She was still doped up on pain meds and didn't feel much.  Come lunch time that all changed!  Her surgery meds were wearing off and she was getting super crabby.  We hit her with another shot of pain medicine and set up shop on the couch with some Disney movies.  About 30 minutes later she asked to go take a nap in my bed.  We both slept for about 2 1/2 hours.  She woke up in a lot of pain.  We elevated her arm and watched more movies.   She ate dinner like she hadn't eaten in weeks.  Once she ate she said her pain went away and she started feeling better. 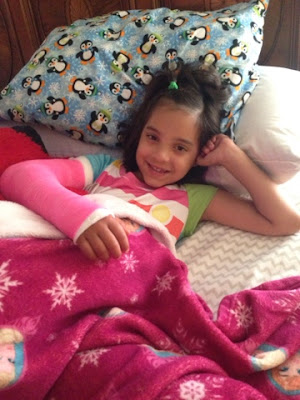 We spent the evening camped out in bed resting and watching kid movies.  Sunday morning she woke up perky and almost back to her usual self.  She hasn't had pain meds since.  This kid never ceases to amaze me!


Thanks to everyone for their prayers, phone calls, texts, emails, greeting cards etc.  We truly appreciate everything.   Hopefully a quick recovery will happen and we can get this cast off before school starts!  Alexis has been doing great with it, she's just frustrated with her limitations.

I've been teasing the girls that the tooth fairy should just camp out at our house lately.  I've officially lost count as to who has lost how many teeth.

On Monday, June 13th Addison lost another tooth.  It's on the side.... 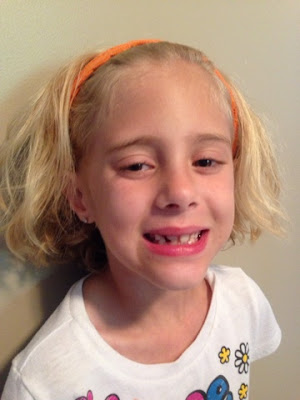 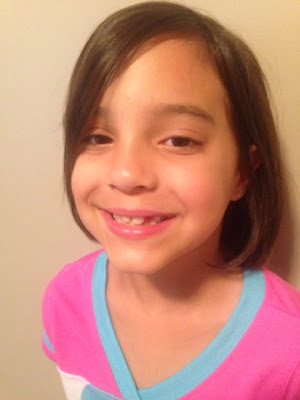 The girls went to a cooking school camp a few days last week.  They had an absolute blast!  They loved it so much we have already signed up for more classes!!   I came home from work to find a shopping list that Addison had made for me.  Love her!! 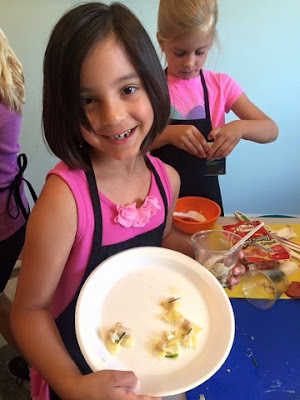 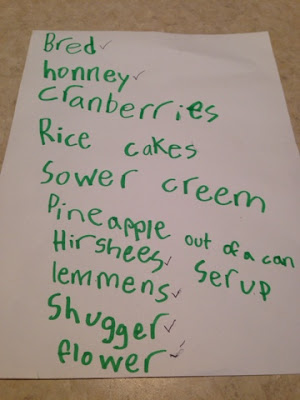 On May 30th we took the girls to do our annual strawberry picking.  The berries were ready a lot earlier this year.   We picked close to 25 pounds and I think the girls each ate a few pounds while we were there. 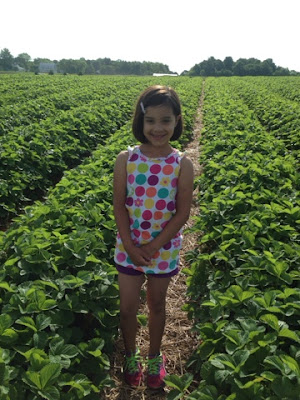 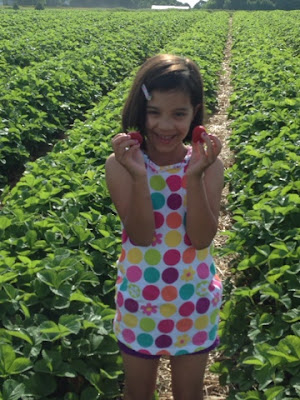 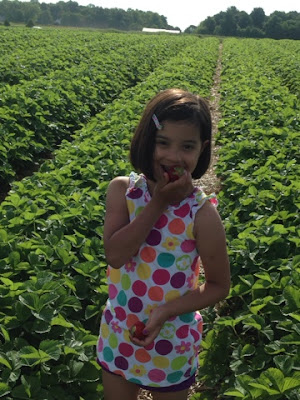 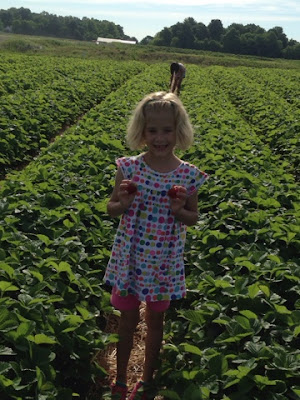 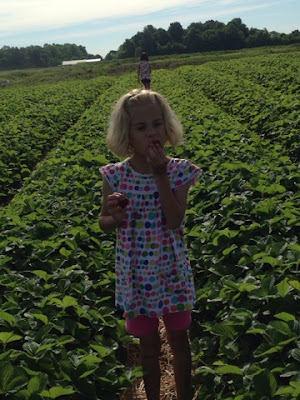 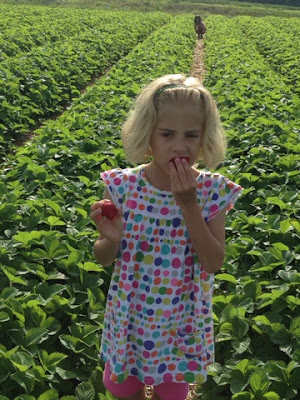 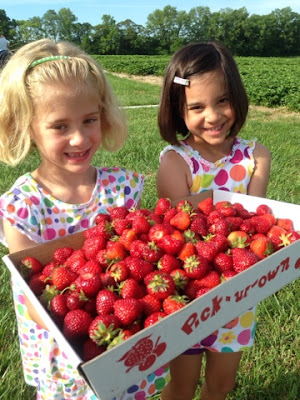 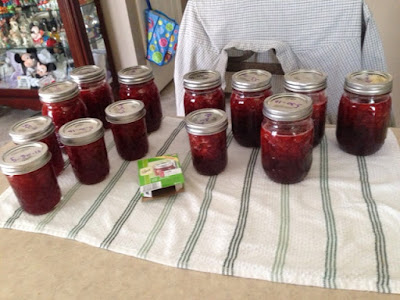 Another one bites the dust.... 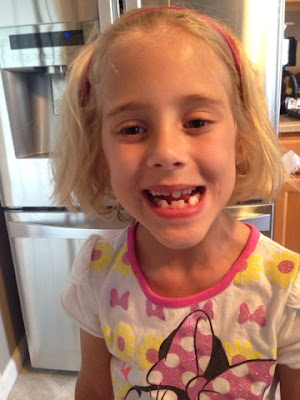 Thursday, May 26th, 2016 was the girls last day of first grade.  This year seems like it is flying by!  Here are a few photos: 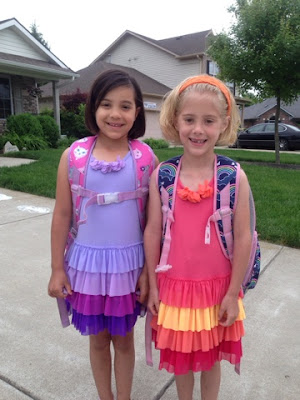 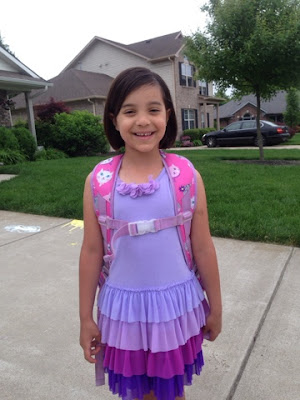 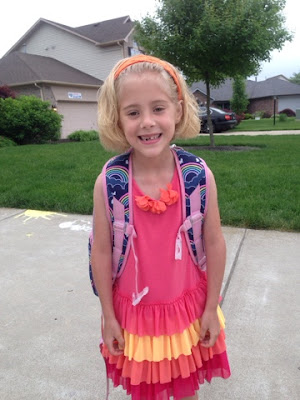 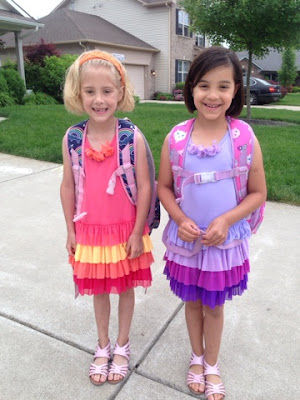 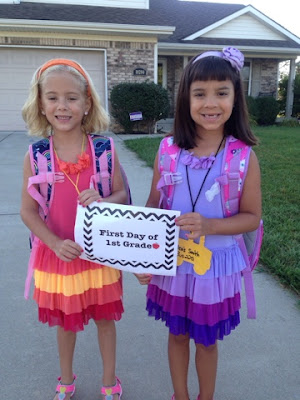