Our poor little Addison has had a rough week.  It all started last Saturday evening (the 12th).  We had planned on attending a bonfire that was a work function.  I had the girls all loaded up in the car.  No sooner than I got onto the highway....BAM vomit city!! Every inch of Addison and her car seat, were covered in vomit.  I immediately got off at the first exit and headed right back home.  I didn't really think a whole lot of it because Addison is prone to car sickness, she didn't have a fever and she was acting perfectly fine.

On both Sunday and Monday we had another couple bouts with vomiting but she again had no fever and was acting perfectly fine.  She was eating fine, and other than the vomiting she was fine.  We just thought she had a small flu bug and were keeping a close eye on her.

Tuesday morning as soon as I get to work (shortly after 9), I get a call from my mother in law.  She said that Addison was lethargic, shaking, and constantly crying.  Addison is always such a happy girl so I immediately  knew something was really wrong.  I called the pediatrician and made an appointment for 12:20.  I called back home to let them know about the 12:20 appointment.  By that time Terry and Linda had decided to take her to immediate care and not wait for the 12:20 appointment.  The immediate care doctor rushed Addison to Peyton Manning Children's Hospital.  By this time, I've left work and I'm driving 85 miles an hour to find out what is wrong with my little girl.  (Thanks Jody for reminding me to slow down and breathe)

Long story short, My little sweet girl was admitted for a very serious viral infection, labored breathing and severe dehydration.  Our ER doctor reminded us once again that "once a preemie, always a preemie".  He said that her little lungs just couldn't handle it and what might be just a routine flu bug for most kids, really hit her like a ton a bricks.  While I'm so thankful that my girls continue to thrive, I'm also reminded that "once a preemie always a preemie" and to never let my guard down.  This is something a lot of people just don't understand!!


Here are a few pictures of our chaotic few days: 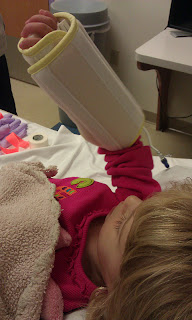 Addison's and her IV cast.  She was such a trooper during this whole process.  I guarantee that I cried a whole lot more than she did!! 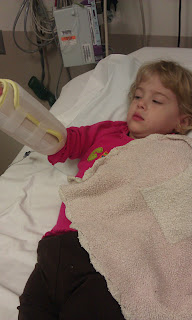 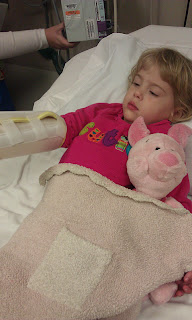 Thank goodness for piglet!  He also got an IV cast.  I can not say enough positive things about this hospital!  Everyone there was so incredible. 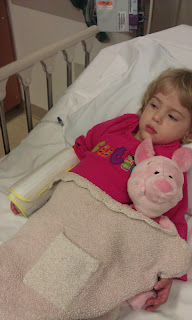 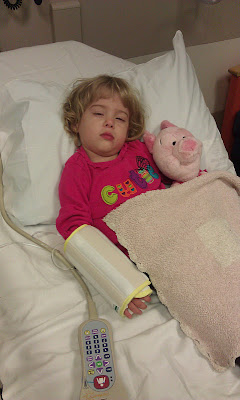 Poor thing!  You can't tell it but her eyes are actually open in this picture.  She was so pitiful! 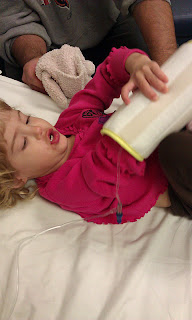 Starting to perk up a little.  Showing Daddy her ouch-eee on her arm. 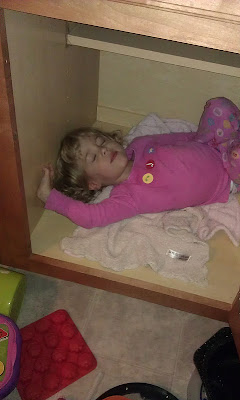 Once we got home we were all exhausted!  This picture proves it 100%.
Addison told me she was going to sleep in her cabinet.  I didn't believe her.  I just thought she was going to play with her toys in the cabinet.
We have one cabinet in our kitchen that is the girls for their "cooking stuff".
Nope, she was serious....she climbed right into her cabinet and went to sleep.
We are all grateful to be back home now and on the mend.  Alexis has also had a few small episodes with vomiting but nothing as major as Addison.  For now we have stocked up on Popsicles, jello and crackers and we count our blessings that it wasn't nearly as serious as it could have been.
On another note:
Due to the fact that I have been MIA because of this whole hospitalization thing, I haven't had a chance to promote my Shutterfly giveaway.  I will keep the contest open until next Monday, November 21st.  At that time not two..... but three winners will be announced.  CLICK HERE TO ENTER!
Posted by Janet at 1:33 PM

Poor Addison! I hate being sick so I know it has to be awful to be sick when you are little. The picture of her sleeping in the cabinet is adorable!

Oh Janet, I've got tears in my eyes! I'm so sorry you and your precious girl had to go through that! So glad you're all home safe together.

Im catching up on blogs...Im so sorry! I hope everyone is healthy now!