We are loving the weather here in Indiana!!  We have broken records for high temperatures the last four days.  Saturday morning the girls got up earlier than normal, so I decided to take them for an impromptu trip to the zoo.  This was the first time I had taken them to the zoo by myself.  I take them alone all the time, but for some reason I was a little apprehensive of the zoo.  We had a blast!  We got to the zoo just a few minutes after it opened.  The girls absolutely loved watching the animals being fed their breakfast.  We also watched the dolphin show, which prompted some very wide eyes from the girls.  They were super intrigued by the dolphins.  All weekend they both kept saying "remember when the dolphin jumped really high out of the water" or "remember when the dolphins jumped through the big hoop".  Love it!!  And what trip to the Indy zoo is complete without taking a ride on the animal carrousel? 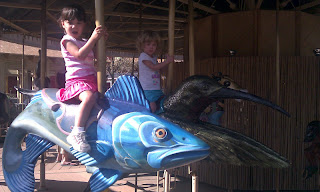 The minute we saw it Alexis declared she wanted to "sit on" the big blue fish.  Addison wanted the tiger but I convinced her to ride the hummingbird by her sister. 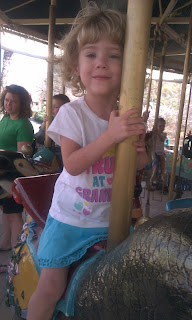 Can you tell it was a little humid out?  Those curls are back! 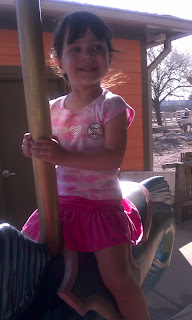 Love that smile!
Everytime we passed by a little stand with either facepainting or tattoos, the girls kept asking to do it.  I have a seriously hard time paying $20 for something that is going to be gone a few hours later.  But the girls did sucker me into doing a "handimal".  I don't think they new what it was at the time, but I love them.  I don't have an actual picture of the ones we did, but this was the photo on the stand.... 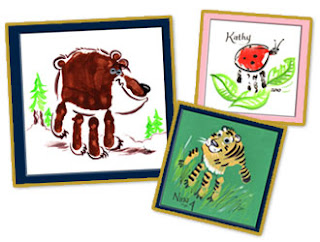 We made butterflies.  I'm currently looking for frames for them so I can put them in their room.  Just having trouble finding a 7x7 frame???  After thinking about it a little, this is probably something we could of made on our own at home, but it's still a neat little souvenir.  We are definitely going to try making more!

After a few hours the girls were ready to go.  Oh, I forgot to mention this was also our first "real" excursion without the stroller, so their little legs were getting tired of walking.  I had to take one last photo to text to Daddy to show him how much fun he was missing!  It's always difficult to get them both looking at the camera (or my cell phone camera) at the same time. 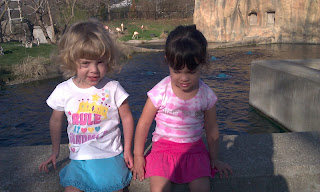 If you look closely, you can see the flamingos (or Mingos as Addison says) in the background.
Posted by Janet at 1:46 PM

I'm a new follwer (coming from Multiples and More). Enjoyed your blog!