As many of you already know, we traveled to Missouri a week or so ago for my baby sister's wedding.  We left our house to travel to MO on Thursday, October 18th, 2012 and returned home the following Tuesday.  Luckily I was smart enough to take that following Wednesday off work to recover/do laundry.

I may be a little biased, but my girls were probably the cutest flower girls that you have ever seen.  I'm going to let the pictures do the talking rather than type out a big long story.  Let's start at the beginning: 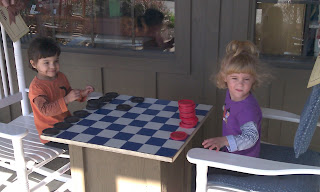 As with all our road trips, we try not to plan too much.  We leave when we leave and we get there when we show up.  I've learned traveling with these two, is always an adventure.  This particular morning we left our house around 11:00a.m.  At about 1:00p.m. it was time for a potty break and some lunch.  The girls had requested that we stop at the "checker restaurant".  No problem!  There is one at almost every exit. 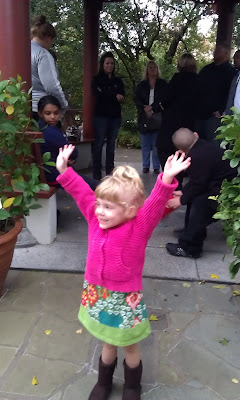 The following evening was the rehearsal dinner.  It was kind of a chilly evening with a few rain drops.  Luckily the rehearsal went off without a hitch.
Addison was practicing her "tah dah's" after she walked over the bridge. 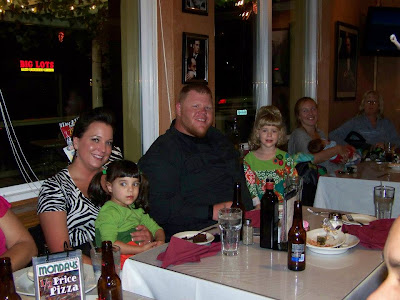 (photo by Sherry Nuelle--Mother in law of the bride)

After the rehearsal, Sandy's future mother in law hosted the dinner at Joe Bacardi's.  I can't say that I was all that impressed with this place but the fellowship and camaraderie was great.  Sandy and Mike were nice enough to hold the girls for a minute so I could eat.

Disclaimer:  If you have a week stomach, skip to the next photo...
The girls were extremely off their schedule and adding in the time difference it was well past 8:45 before they had dinner.  I blame myself for not prepping better and bringing snacks.  Addison was so hungry when she finally got some food that she was shoving things into her mouth.  It also was extremely warm in the restaurant.  Everyone had been served, but for some reason I still didn't have a plate.  Addison came over to sit on my lap.  She looked at me and said "Mom, I'm gonna puke".  I had about 3 seconds warning.  I grabbed my Mom's empty coffee cup and Addison let go.  Luckily we were able to grab another empty cup from another table and the mess was pretty minimal. 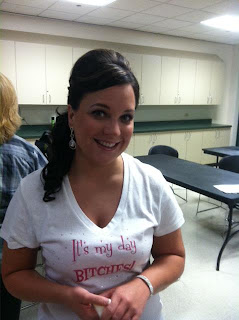 The next day was the big day!!  The girls got up wanting to know if this was the day that they get to wear their princess dresses.  They were pretty excited.
Love Sandy's shirt! 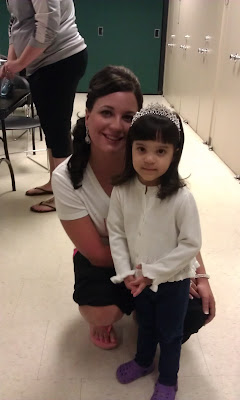 I don't know why, but I absolutely adore this picture of my 'lil sis and my 'lil peanut getting ready before the wedding.  Everyone says Alexis looks like a "mini Sandy". 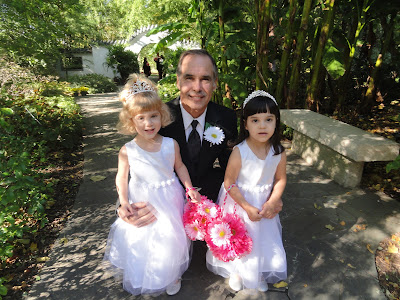 A few moments before the ceremony was to start, I was able to capture my princesses with Grandpa. 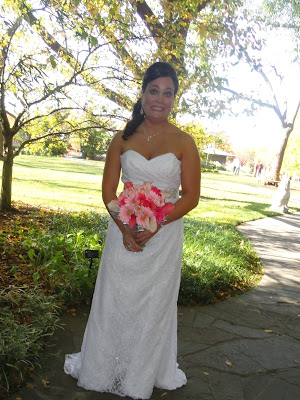 Anyone who knows my goofball sister, knows this is a typical pose for many of her pictures.  I was lucky enough to capture it just seconds before she was to walk down the aisle.

Stay tuned for part two!  I'm weeding through almost 350 pictures.
Posted by Janet at 11:58 AM