What will they be???

In the last month or so, Alexis has decided that it is important for her to decide her career path.

Then she wanted to be a Princess like the princesses at the party.

After tagging along with me during a trip to the vet's office.....She now wants to be a cat doctor. 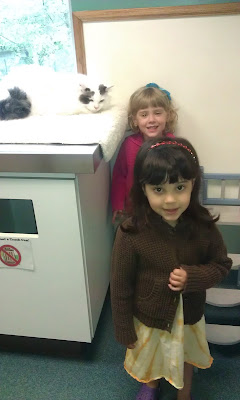 On a side note:  Yes, that is our cat Jynxie laying on the exam table.  She is fine.  We just had to take her in for a glucose monitoring test.  Her diabetes seems to be under control for now.  I never would of thought that I would be one of those crazy cat ladies, giving my cat insulin shots!  :-)


Addison doesn't talk much about what she wants to be, but over the weekend she also mentioned wanting to be a "cat doctor".  She's got a knack for animals, she really does.  Jynxie will tolerate just about anything that Addison does to her.  It's very strange that Addison can tackle Jynx, hug her, dress her up and she will just lay there and take it.   But when Alexis tries to "play" with her so wants no part of it. 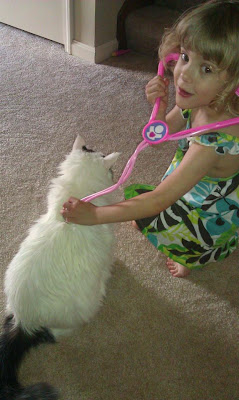 Addison giving Jynxie a check up! 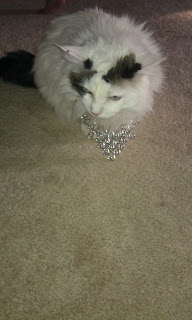 See, this cat will tolerate anything Addison does to her.....even dressing her up in jewels.  :-)
Posted by Janet at 9:30 AM