On Thursday, September 18th, 2014 Alexis lost her first tooth!  It had been wiggling for several days at this point.  She came in my bathroom while I was getting ready for work.  She asked me to look at it and tell her how long I thought it would be before it fell out.  The tooth was barely hanging on.  I told her it would be really soon!  She went downstairs, ate breakfast and came back up to talk to me.  She asked me about it again.  I wiggled it myself and it fell out right into my hand!!  Of course, this all happened about ten minutes before we needed to be getting on the bus.  The small amount of blood kind of freaked her out a bit.  We went downstairs and gargled some salt water.  After about three mouthfuls of salt water the bleeding stopped and we went outside to catch the bus.  She couldn't wait to tell all her friends, her teacher, the bus driver and anyone who would listen about her missing tooth.  She was so excited!  I did feel super bad for Addison, because you could tell she was super envious of her sister.  We just kept reassuring her that eventually her teeth will fall out too. 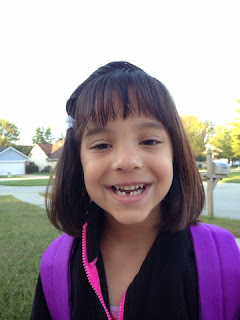 Waiting for the bus! 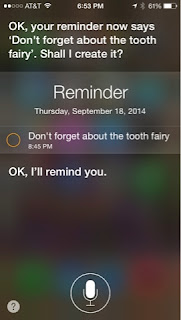 For real....How is there not a parent tooth fairy reminder app yet????  I had Siri remind me so I didn't forget. 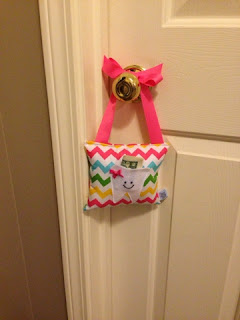 As soon as that tooth started wiggling, I went on a hunt for a tooth pillow.  This one had an adorable pink ribbon on it.  The girls (all by themselves) decided that the ribbon was so that you could hang the pillow on the door.  By hanging the pillow the tooth fairy would not disturb you and potentially wake you up.   I had no qualms with that idea!! 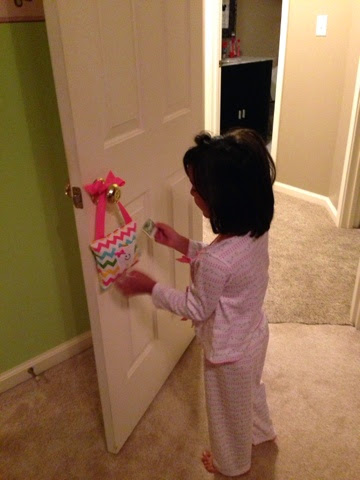 Ignore the bed head....but this is my little peanut checking out what the tooth fairy left for her. 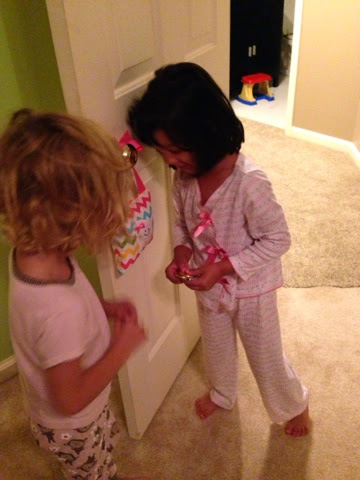 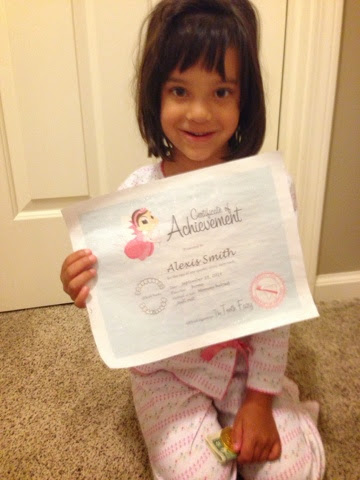 The tooth fairy left her a certificate covered in fairy dust (aka glitter spray paint). 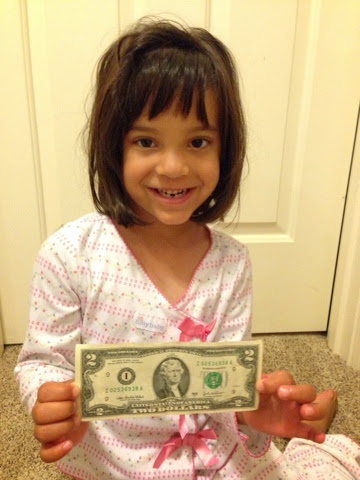 She also got a crisp $2 bill which she proceeded to ask me if it was fake money.  They are learning about money at school and for obvious reasons (which she didn't understand) she hasn't learnt about a $2 bill yet. 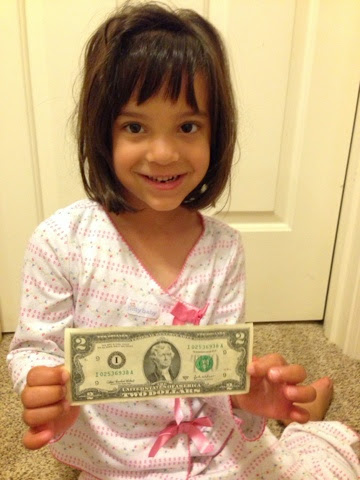 The tooth fairy also left two gold chocolate coins and a note for Alexis asking her to share one chocolate coin with her sister Addison.  She was happy to oblige.
They each also got a coloring book (which I printed online) full of pictures of the toothfairy and helpful hints about brushing regularly.
Alexis has been hysterical through this whole process.  She has had to call everyone we know and tell them about her new "pumpkin face" (because I was teasing her about looking like a jack-o-latern).