We started the day by sleeping in....well until about 8:30 anyway.  Today would be an Epcot day.  We all showered, had a mini breakfast in our room since we were scheduled for an early lunch. 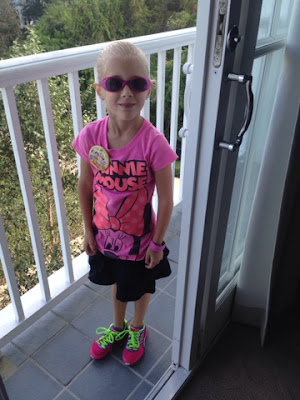 Addison was taken aback by our mini balcony.  She continually commented on it's size, or lack there of.  If this thing was two feet wide that is pushing it.  Don't get me wrong, our resort was incredible....but we did have a few issues with our room. 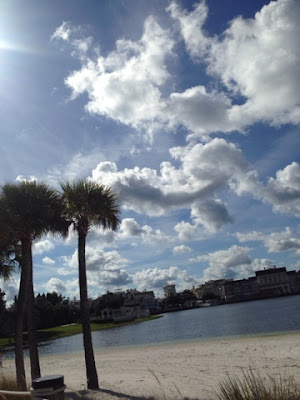 The weather was absolutely gorgeous!!  I love puffy clouds!!!  Our resort was a short walk from Epcot so we decided to walk today instead of taking the boat. 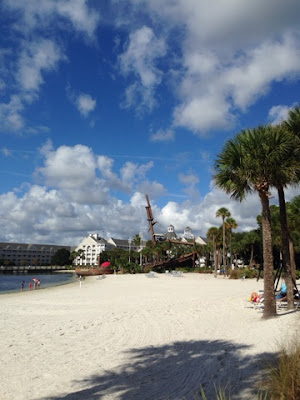 This was the first time that the girls got a good look at the wrecked pirate ship on the beach.  They couldn't believe it was actually a waterslide. 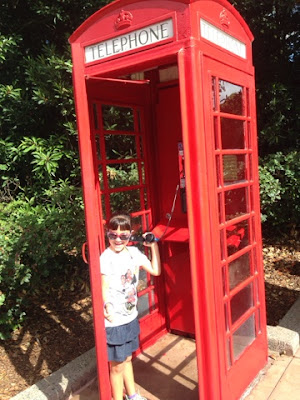 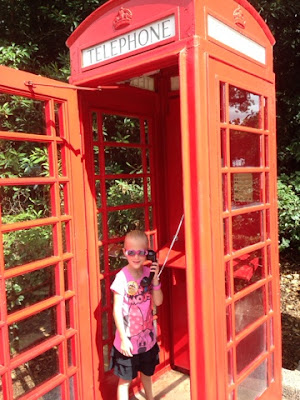 Inside Epcot the girls thought these phone booths were hilarious.  They have never seen a phone booth before and probably never will again. 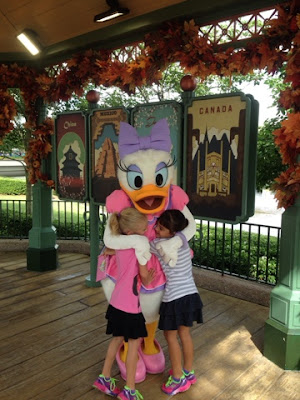 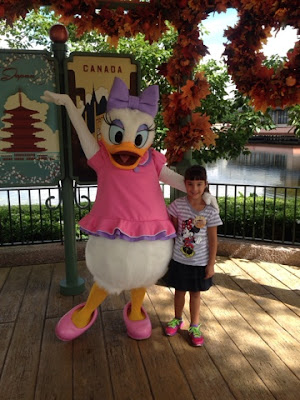 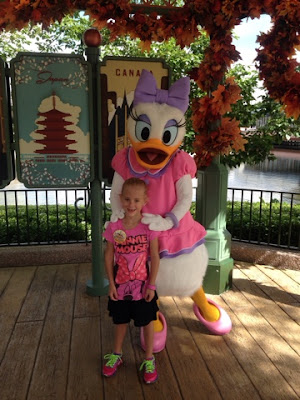 A lot of random things just came together for us on this trip.  While we did have a general plan for every day, some things just perfectly fell into place.  For instance..... Randomly running into Daisy while we were heading to lunch.  The girls loved her!!! 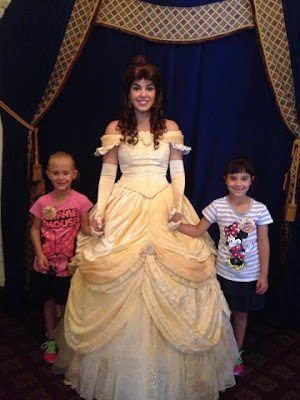 At lunch we got to meet the princesses and the girls got all of their autographs.  They were literally star struck the entire time! 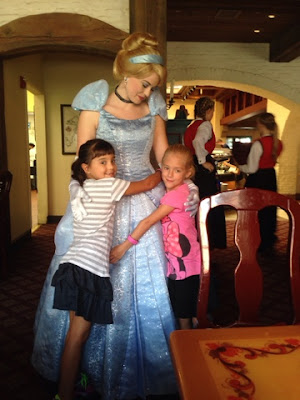 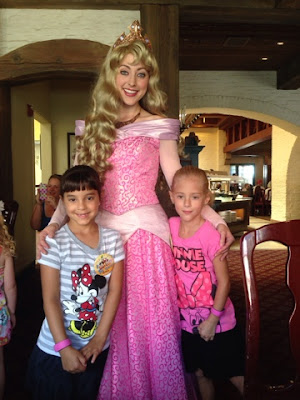 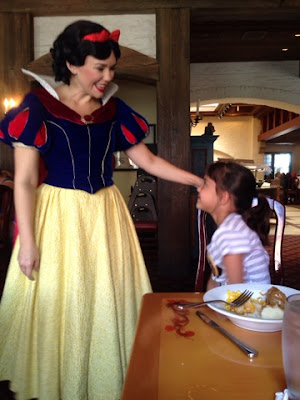 I love this photo of Alexis telling Snow White that she was going to be "her" for Halloween.  They had an entire conversation about it. 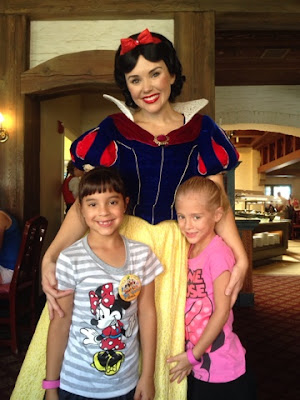 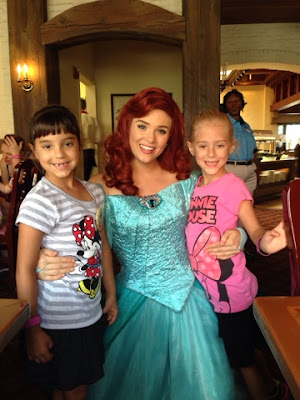 The girls chatted with Ariel for awhile as well.  Ariel commented on how all of their names start with the letter "A". 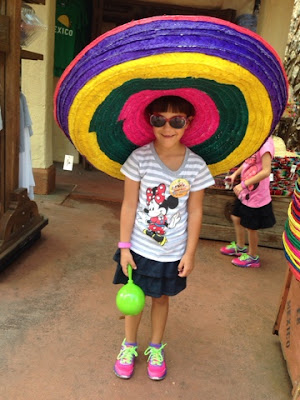 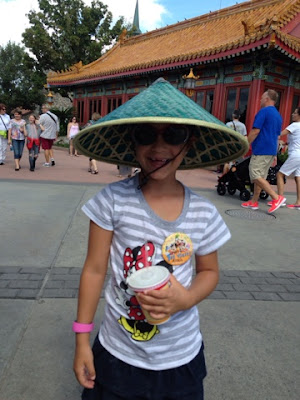 After lunch we slowly made our way back to our hotel.  Alexis thought the hats from the different countries were hilarious.

I had a massive headache, so Terry was going to take the girls swimming while I attempted to sleep it off. 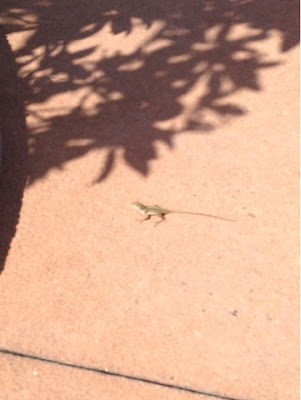 On the walk back to the resort we saw several lizards.  Addison was petrified but Alexis kept trying to chase them.  Chasing lizards was a daily occurrence the remainder of our trip. 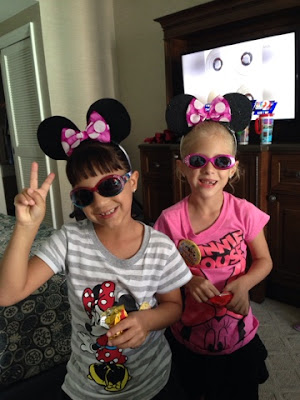 After swimming and a quick nap for me..... we made our way back to Epcot for some rides, dinner and the nightly fireworks. 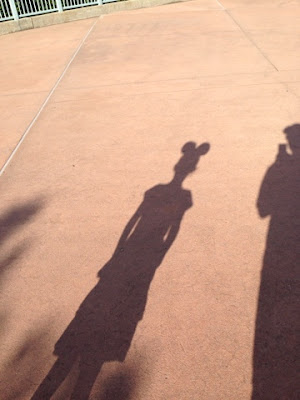 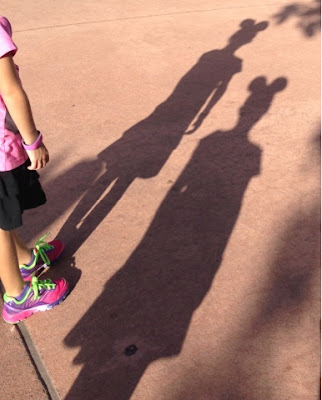 I thought these shadows were cute! 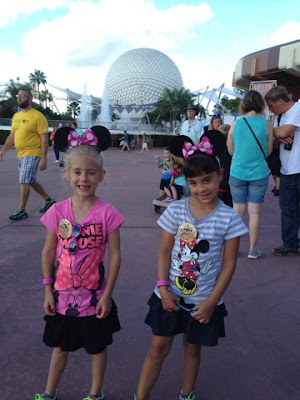 We rode the test track roller coaster where I learned that my girls have no fear and are adrenaline junkies.  They were in love with how fast it went.   After the test track, we had a quick dinner and then headed over to meet Mickey and his friends. 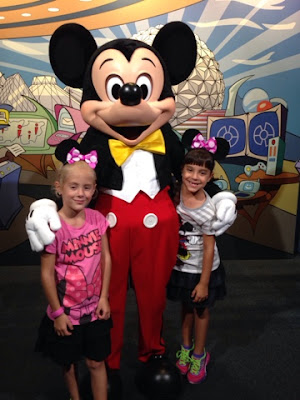 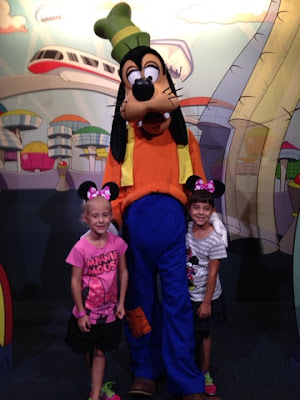 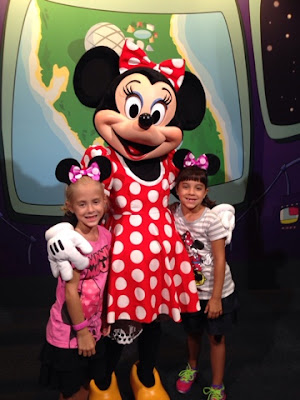 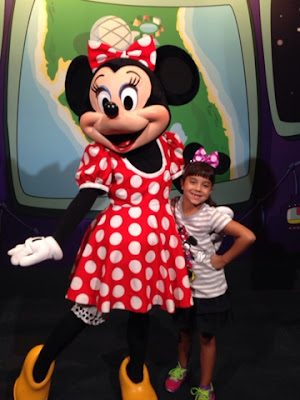 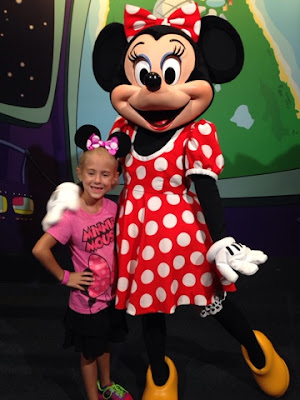 The girls were loving the "big ball" and wanted to see how close they could get to it.  So we headed that way and actually were able to walk onto the Spaceship Earth ride.  (The ride inside the "big ball") 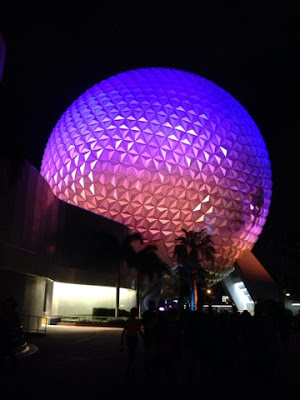 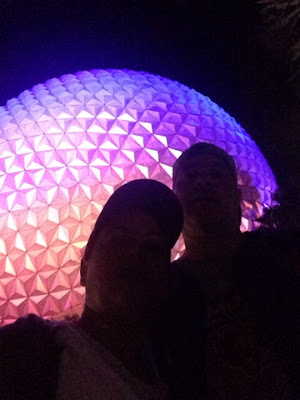 We rode a few more rides and then made our way over to see the fireworks.

Upon re-entering Epcot in the afternoon (after swimming) I had stopped and asked a lady for directions.  Terry and I had disagreed about reading the map so I just asked someone.  The lady was super nice when giving me directions.  She commented on my Indiana University shirt I was wearing and said she was actually from Indiana as well.  Small world!  Since she was so helpful I asked her for her opinion about where we should watch the fireworks from.  She told me to hold on for one minute.  She made a call on her walkie talkie thingy.  She asked me what our last name was and  proceeded to talk on her walkie talkie.  That nice lady arranged for us to watch the fireworks right on the water.  Talk about the best view in the house.  Another example of a things just kind oflling in place for us on this trip!!!
Posted by Janet at 3:05 PM