Halloween is a special time around our place, at least it is for me.  Last year on Halloween is when we found out for sure that I was pregnant.  So we decided that we needed to celebrate by dressing up our two little blessings.  Obviously this was more for my enjoyment than theirs but it was still fun regardless!! Above is Alexis. Who is paying more attention to her father, than to me. 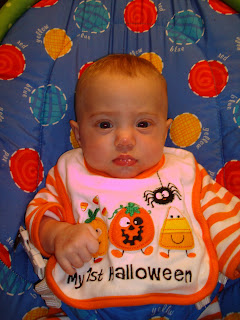 Above is Addison.  She just wants this picture stuff to be over so she can have some food.  But how can you not love those sweet little lips?

The girls have been loving their Halloween pj's.  Here are just a couple of random pictures of their pj's. 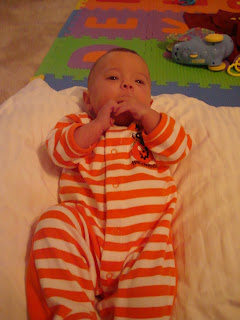 Above is Addison.  We are seriously working on some teeth at our house.  It's getting harder and harder to get pictures without their hands in their mouths. 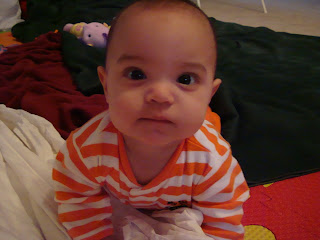 Above is Alexis.  Don't you just wanna squeeze those little cheeks?

The next few pictures require a little explanation....The back side of the Halloween jammies have a little pumpkin face on it.  Whenever the girls wear these particular jammies, Alexis is always fascinated by the pumpkin face on Addison's bottom.  I'm not quite sure what she thinks she is going to accomplish, but she always tries to attack the pumpkin on Addison. 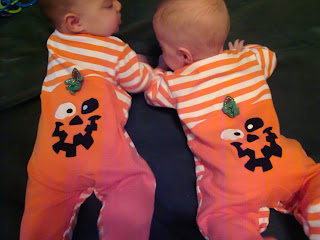 Above:  My little punkin butts!  Alexis on left beginning to eye ball the pumpkin tushie on Addison (right) 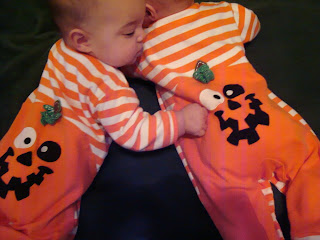 Yep, she found the pumpkin. 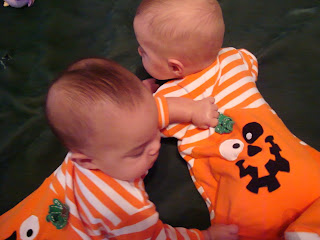 This is the point where Alexis started attacking Addison's pumpkin tushie and we had to seperate them.  Addison was trying to figure out what the heck was going on. 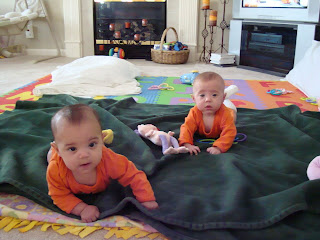 Above:  The girls playing nicely.

Ok, here are the pictures that I know you have been waiting for.....the costumes.  Addison was totally into her halloween costume.  I'm pretty sure that she was only interested because her costume was sparkly.  Alexis wasn't enjoying being dressed up as much.  My pictures did not turn out great but here you go: 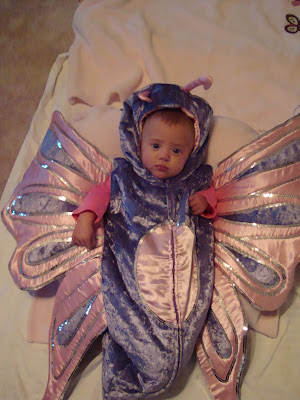 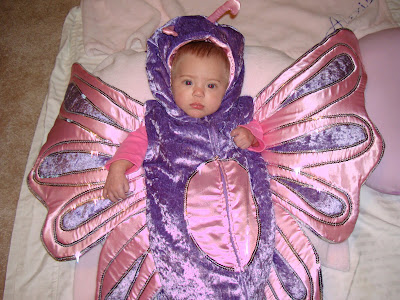 The above two pictures are of my beautiful butterfly Addison.  She was so mellow about everything and was just chillin' in her costume.  Isn't she a doll? 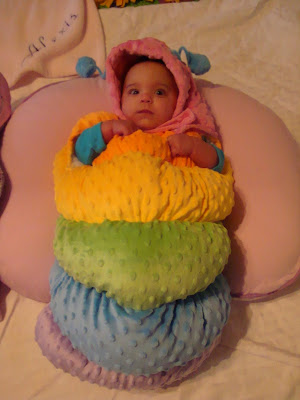 The above picture is my super cute caterpillar, Alexis.  This is the only decent picture I could get of her.  She was squirming around and wouldn't pose for me.  Regardless, she still looks cute. 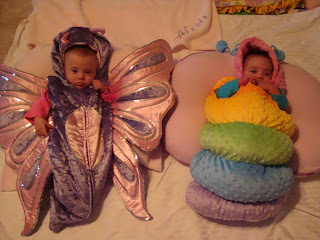 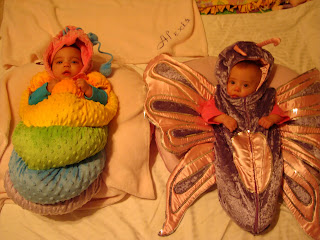 The above two pictures are obviously the girls together.  Sadly these were the best pictures I could get.  It's difficult to get both of them to look at me at the same time.

They are soooo cute in their costumes. LOVE IT!

Oh, and I love how Alexis attacks Addison's pumpkin butt. That is hilarious!