I'm sure by now you have all seen the below video of the tragedy at our local state fair.
http://www.theindychannel.com/video/28859295/index.html
After attempting to go to the zoo on Monday, only to find that they had closed early, I was a little leery of heading to the fair instead.  I had the girls all pumped up to see animals so we had to find some form of backup plan to appease their requests to see some animals.
Terry quickly suggested that we go to the fair.  After the horror stories that I had been seeing and hearing on the news, I was a little nervous about going.  I'm not sure why, but I just didn't want to go.  The girls were in the back of the car begging to see animals so I agreed.
I'm not really sure how it happened, but Terry and I ended up being ushered into the park grounds and directed into a media parking area.  No joke, we parked next to at least 75 television news vans from all over the country doing stories about the tragedy that had happened a mere two days before.  There was a very quiet calmness that lurked around the area where the stage once was.  I wish I could find the words to describe how creepy that feeling was. 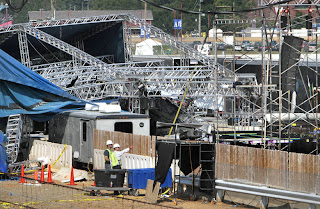 They had this area roped off but we were still able to get strangely close to it.  I'm convinced that since we somehow parked in the media area, we weren't really supposed to be where we were.
Immediately tears welled up in my eyes.  I wanted to go to this concert, but because of our trip to Chicago I didn't.  My heart was (and still is) aching for all the families that lost loved ones or had a family member or friend injured in this horrific fluke accident caused by mother nature.  I felt the strange need to kiss my kids and give Terry a ginormous hug.  There really are no words to explain it.  I even caught Terry with a small tear running down his cheek.
*********************
Any who... The girls had a fantastic time walking around all the animal barns.  We saw the worlds largest and second largest pig.  Addison's words explain it perfectly, she pointed and yelled...
"BIG FAT PIG".  The pig's bodyguard actually burst out laughing.  Yes, the pig does have a body guard!  Weird I know!
One of my absolute favorite things at the fair is corn.  I don't know why... but a big fat ear of corn, soaked in butter is so much better at the fair than it is at home.  Once we left the swine barn, we ran into a booth that was selling corn.  Terry and I both got an ear.  Alexis immediately started yelling, "bite, bite bite".  I didn't figure they would like it since they have never really eaten corn well at home.  Needless to say we ended up going back to the booth and buying two more ears of corn.  They girls also enjoyed pigging out on other fair food such as corn dogs, french fries, funnel cakes and ice cream.
Sadly I had forgotten my camera at home and my cell phone battery was getting low so I was only able to capture a few pictures. 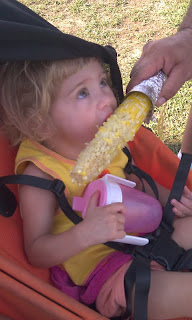 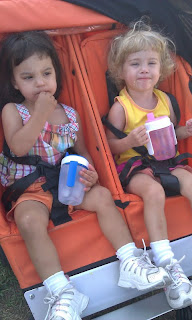 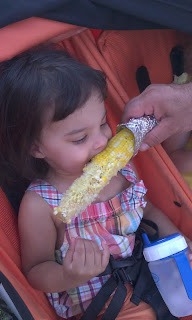 When we were leaving the fair we were once again reminded of the horrific events that had happened just a few days prior.  Our prayers continue to go out to all the victims of the tragedy at the fair. 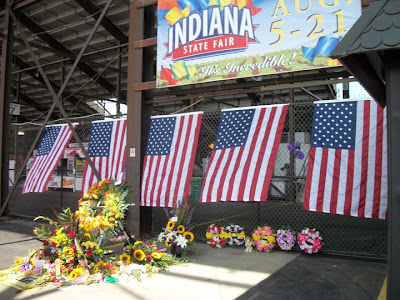 We had been to the fair two times before and one time after the tradgedies this year. Unbelievable what a different atmosphere it was before and after. The stage was still down and it was very eery to see it there where you know six people lost their lives. Just horrible. :(