Lately the girls have really been into trains.  Numerous times everyday you can hear at least one of my girls running around the house yelling "All Aboard" or "CHOO CHOO".  A few days ago, Alexis was playing with her Thomas the train that she got for Christmas.  She loves this particular Thomas.  He runs on batteries and will not stop.  He will keep going on the carpet and if it runs into something it flips and starts heading another direction.  This particular evening, I was cooking dinner and I hear the girls giggling.  I figured they were up to no good, so I went into the living room to see them playing trains with Jynxie (our cat).  Alexis was on the left side of the living room and Addison was on the right side.  Jynxie was laying in the middle of the floor.  They were running the train back and forth watching Jynx freak out and bat at it with her paws.  Every time that Jynx would start meowing the girls would giggle.
After being reassured that they weren't actually causing mischief I went back to working on dinner.  A few minutes later, Addison comes into the kitchen and tells me that Alexis has a train on her head.  I didn't really think much of it at the time.  I just kind of blew it off.  Then a few minutes later Alexis comes into the kitchen crying....  "Mommy, I have train on my head."  Sure enough....She had a train on her head and that train was wrapped around and around and around her hair.  As I previously mentioned....this Thomas does not stop!  He also didn't stop when his wheels got tangled in Alexis' hair.  It keep running and running until I turned him off.   We spent close to 20 minutes trying to untangle Thomas from Alexis' hair.  I was so close to getting the scissors.  But thankfully we didn't have to cut her hair!  It was so funny at first that I had to take a few pictures.  And then the real craziness began....trying to get Lex to sit still so we could get Thomas out.  Oh how this little girl really keeps me on my toes!! 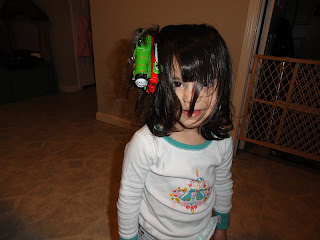 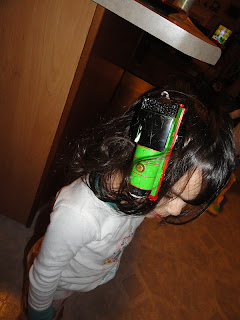 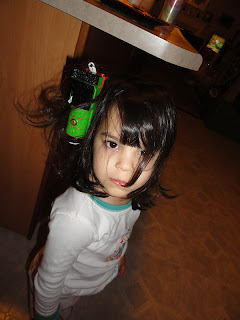 too funny!!! so glad you didn't have to give her a mullet :P

Oh no! What a relief that you didn't have to cut it out!

What a funny story! That cracks me up!