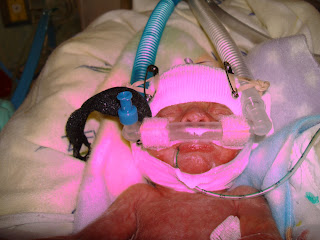 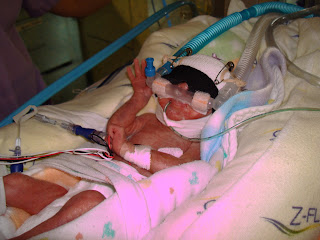 I know that I said that I wasn't going to post today, but I couldn't not blog about today!!
Miss Addison is now on c-pap!!! She had her breathing tube removed around 3:00 today. It's taking a little bit for her to get used to it but she is doing well!! Both girls are continuing to do great!!! Our prayers are slowly being answered one by one!!
Tomorrow is going to be a big day for both girls. Both our angels will have brain ultrasounds tomorrow and full physicals. Alexis is having her umbilical catheter removed tomorrow and a pick line put in. (The same thing Addison had a couple of days ago....basically it's the same as an adult IV line.) We are hoping and praying that tomorrow continues to bring us good news about our girls!!!
While we were in the NICU today the lights flickered on and off. I have never seen so many people move so quickly in my life!!! The nurses all ran to check on the babies who are still on the ventilators. Luckily our Addison was off the vent when this happened! But it's great to know that in the event of an emergency everyone is on their toes!!!
Terry & I got to help with both girls assessments this afternoon. I did Addison's & Terry did Alexis'. Basically we just take their temperatures for the nurse and change their diapers while the nurse is doing everything else. It's just nice to be able to touch my girls. I can't wait until the day that I actually get to hold them in my arms!!
I'm still having some issues with youtube. GRRR!! I don't think I'm going to be able to figure out how to post the baptism video on there. I'm not totally giving up yet, but I'm close! Today's pictures are of Miss Addison. The two above pics are Addison on her c-pap!! I know she looks really red and splotchy. It's not as bad as it appears in the pictures. It's so hard to get a decent picture with the jaundice lights on her. The video below is of Miss Diva herself....Alexis. She's being suctioned out and isn't too happy about it. I couldn't resist posting the video of her sweet little cries!
Please send out extra prayers that both brain scans & physicals go well tomorrow!!! I can already tell I'm gonna have a hard time sleeping tonight!!
Posted by Janet at 5:52 PM

HOW CUTE IS THAT LITTLE CRY! I CONTINUE TO PRAY FOR MY BABY NIECES EVERY SINGLE DAY. I CAN'T WAIT TO MEET THEM. ALL MY FRIENDS AND CO WORKERS ARE PRAYING FOR THESE ANGELS ALSO.
LOVE YOU GUYS
AUNT SANDY

What a big day! We are so happy they are do this good. Try turning the billie light into black and white and they don't look so bad!

Those 2 girls are so precious. Our thoughts and prayers are with all of you. Let's keep the good news coming!

HELLO LITTLE BABIES!!! My goodness, what a great improvement! Just looking at them makes me cry. How much tissue have you two gone through?
hey are beautiful, healthy and loveD! My thoughts are always on Addison and Alexis=-I wonder if they are thinking about me? Kiss, Kiss-Auntie Laura