The sweetest sound you ever heard..... 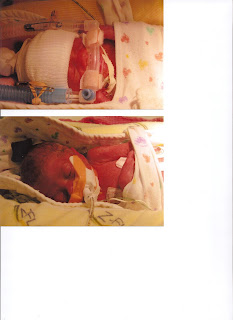 To be continued..... It took me about 45 minutes to figure out how to scan these pictures and it still isn't right... Dinner time... will post for today in about an hour.

Ok, lets try this again....Today was an eventful day for all of us. When I was watching Alexis I heard the softest sweetest little whimper/cry. I don't know why I didn't realize it, but since we are on day two of Alexis without her breathing tube in her throat she can actually cry. It was probably the sweetest sound I've ever heard. Alexis continues to thrive without her breathing tube. She still has her c-pap apparatus, which looks worse than it really is, but she seems to be holding her own. Terry got to change Alexis' diaper today and take her temperature for the nurse. He was a little apprehensive about this. It's very overwhelming the first time, because of all the cords attached. My first time changing them was pretty scary. It's easy to be fearful of pulling out a cord or tugging on something and hurting them, so I understand why he was afraid. (Alexis is pictured on top, with the little white hat on. The hat actually holds her c-pap in place.) My mom saw Alexis yawn. She's a little diva. She's always all stretched out with her foot tapping. We should have some more pictures up soon. Terry put his wedding ring around her leg, it kind of puts the size thing into perspective. I hope to have those pictures soon!

Addison also had a great day today. One of her cords into her belly button was no longer doing its job. They say that this is normal and that sometimes the cords only last a few days. The cord that was no longer functioning was Addison's food source. (I don't remember the actual technical name of this cord) She had a pick line (not sure of the spelling) placed into her left arm this afternoon. Basically this would be comparable to the same as an adult having an iv placed. They had her slightly sedated while doing it but she did a great job. I also got to change Addison's diaper & take her temperature. She had saved up a pretty massive poo for me. Due to the way she is being fed, her poo pretty much resembles a tar like substance.

The girls are going to be baptized tomorrow afternoon at 1:00. We've gotten special permission from the NICU to have a few extra people present. We are only allowed to have 2 people present per girl, meaning we can only have 4 people in our area at a time. Everyone in the NICU has been really great and has been super accommodating to all our requests. It makes it easier to sleep at night knowing that they are being cared for so well. The above picture was actually taken by the girls night nurse, Carrie, yesterday. The nurses during the evening apparantly do a lot of scrapbooking for the parents of the NICU babies. I thought this was very cool!! The evening nurses are not usually as busy since they don't have as many parents in and out. Carrie had made a scrap book page of Alexis, on her first day without her breathing tube. And she made a page for Addison as well. Again just another thing that makes me feel a little better about their level of care. Until tomorrow.....
Posted by Janet at 8:11 PM

Beautiful little girls Janet!!! Which is which? Hang in there sweetie!!!

The girls are adorable. We love you all. Uncle Andy, Aunt Paula, and cousin Luke

They are so adorable, I can't wait to meet them. You and Terry will be excellent parents!