Sorry for the lack of posting recently.  Things have still been a little chaotic around our house.  Terry is doing much better but still has a lifting restriction of five pounds.  We are very fortunate that my Mom was able to stay with us after the party to help out.  The girls are loving having her around.
About a week ago I noticed that Miss Alexis finally popped out another top tooth.  She now has four teeth.  Two on top and two on bottom.  Addison also still is holding strong with four as well.  We've been noticing that as the girls start teething more, that they aren't as interested in napping and their sleep is becoming more and more disturbed at night.  I'm hoping that this is just a phase.

I did talk to the girl's pediatrician on the phone the other day about the teething issue.  We had a chicken pox scare that I had originally called the pediatrician about, so while I had her on the phone I wanted to pick her brain regarding some other issues.  She assured me that the teething thing is all normal and the girls will eventually return to sleeping again.  I also mentioned to her that the girls seem disinterested in drinking their formula lately.  She again assured me that this too, is also normal.  She told me that as the girls start eating more and more solid table food, they will not want the formula as much.  She still wants us to continue with the formula until they are at least 15 months to help bump up their weights a little.  She told us that we may want to think about switching to a "toddler" formula. 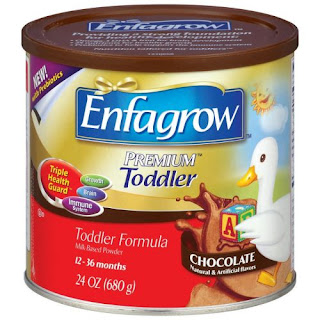 Does anyone else see a problem with this formula??  Is it me or am I crazy to think that chocolate baby formula is a little on the strange side????  I guess there must be people out there who use it otherwise they wouldn't make it but I still think it's weird.

So as I was pondering our formula options, and ruling out the chocolate formula, I started thinking how a dentist would feel about a toddler drinking chocolate formula.  Then it hit me....why haven't we been taking care of the eight little teeth that we now have?  I'm obsessed with oral hygiene so it shocked me that we haven't been brushing the girls teeth.  I can proudly say that I've only had 4 cavities in my entire, almost 33 years.  I didn't get my first cavity until I was in my late 20's.  I hope to be able to pass that onto my girls.
So we got out the girls toothbrushes and put them to work.  Of course, they didn't quite understand the concept of brushing their little chompers yet, but we are working on it.  Here are a few pictures: 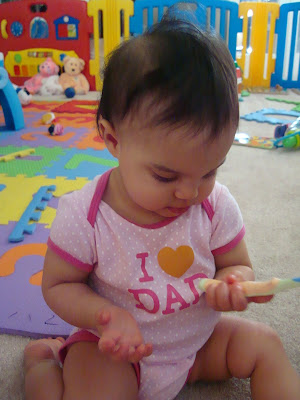 Above Alexis:   "What the heck is this Mom?" 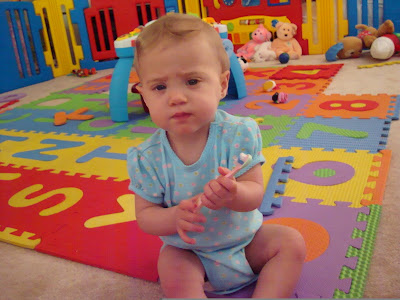 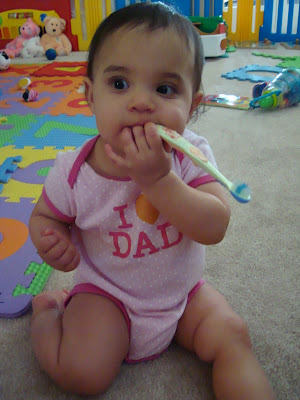 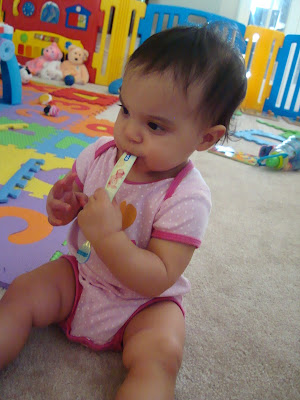 Above two Alexis:  "I like chewing on this side better Mommy." 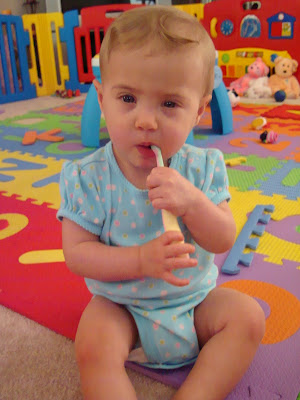 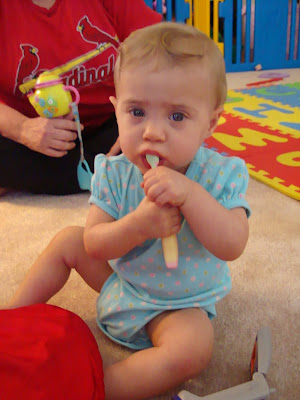 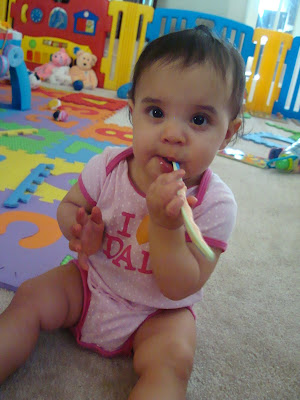 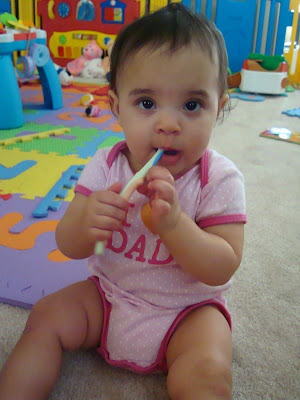 Chloe stopped using formula, but I wouldn't think chocolate formula would be good for babies at all! Although, if they won't drink the formula maybe that would be the only way to get them to eat? I don't know.

I've been brushing Chloe Jo's teeth since she got her first one and she loves it! She gets really excited when we go into the bathroom after breakfast to brush teeth. She hasn't gotten the spitting thing down, but we are working on it!