Sadly, Terry's last surviving grandparent past away last weekend and Terry had to unexpectedly make a trip to Chicago.  This meant that I had to take yesterday off work.  I fully expected to be dealing with two mega fussy babies since the past few days Terry has been telling me that the girls have been extremely cranky, fussy and whiney during the day.  This also held true for the past weekend so I was prepared to take on a rough day.

Nope, the girls were perfect angels.  They slept in just a little, only 15 minutes, but every little bit helps right?  They ate a perfect breakfast and lunch.  They went down for naps and slept nearly three hours while I got a bunch of stuff done around the house.  We went to the park and had a fantastic day.

As I was changing Addison, she was laughing at me singing a stupid song to her.  My stupid song was an attempt to get her to hold still during the changing.  She grinned really big and I swore I saw something in her mouth.  I finished her diaper and pinned her down in an attempt to get whatever it was in her mouth out.  There was nothing in her mouth, but to my surprise Addison now has four top teeth and four bottom teeth.  This again explains the massive crabbiness the past week or so.

Alexis still maintains her two bottom teeth and four top teeth, but she slobbers like a St. Bernard so I'm fairly certain that she is also working on two more bottom teeth.

Here are a few pictures of the girls playing in our yard.  Again if you don't know by now...Addison is my blonde hair, blue eyed beauty and Alexis is my dark hair, dark eyed little angel.  Alexis won't hold still for long enough to take a great picture. 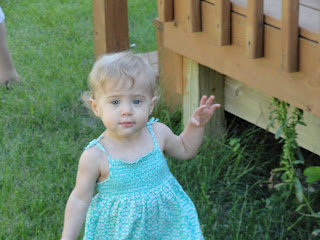 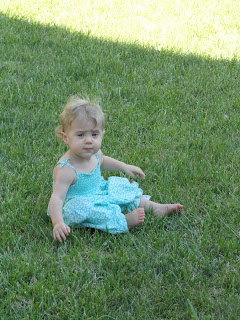 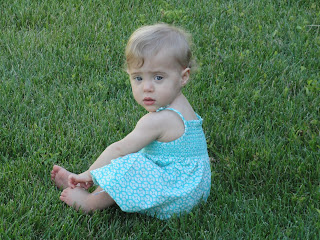 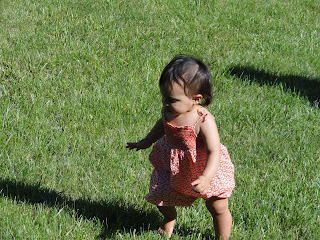 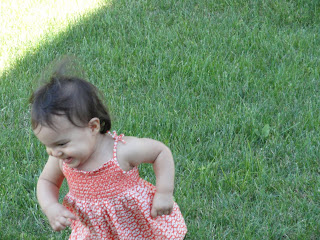 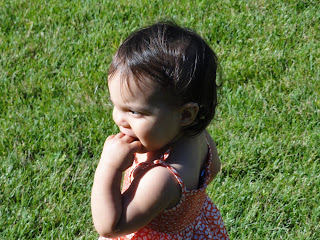 Pretty little girls. Amazing how they each have their own looks, yet came from the same womb. It will be so interesting to see how they look when they grow up!

That is awesome that they were so good for you. That definitely makes for a great day!