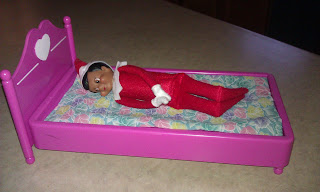 It may be hard to tell from the above photo but this is "Joe".  He is our African American Elf.

Our Elf was gifted to us four years ago by a family member who purchased him at an after Christmas clearance sale.  "Joe" has been in storage until the girls were old enough to play along.  Imagine my surprise when opening the box this year to find he wasn't Caucasian.  No big deal, right?  I had no idea that the Elf on the Shelf came in different genders and/or races.

Addison decided upon the name Joe.  I can't really recall how exactly the name came about, but it was Addison who picked his name.

Joe has been up to a lot recently. I don't believe in making Joe be naughty like a lot of the photos I've been seeing recently on Facebook.  In my opinion, it's not right for the Elf to be able to be mischievous but my kiddos cannot because Santa is watching.

Joe has been known to hang from the ceiling fan, eat a candy cane from the Christmas tree, eat a banana, leave a note on the magnadoodle, take a flight in the Little People airplane, hang out in our stockings....and several more.  At first the girls did NOT like the idea of Joe playing with their toys.

Just like Mommy, Joe is tired.  I'm running out of ideas that don't involve him being ill-behaved.  Last night Joe was just too tired to be creative!!!

(Apparently he was too lazy to cover himself with the blanket as well!)
Posted by Janet at 3:11 PM