All of us are tired of all the snow and cold weather here.  The girls are just itching to go outside and play and I can't say that I blame them.  It's just been blustery cold and windy here.  Both of them are fighting a nasty cold and I'm running out of things to keep the girls occupied indoors.  Last night I asked the girls to draw me a picture of their favorite thing to do outside.  Addison did not want to oblige, but Alexis drew me a picture of a snowman.  She said she loves to play in the snow, but likes playing at the park better.

Here is her snowman: 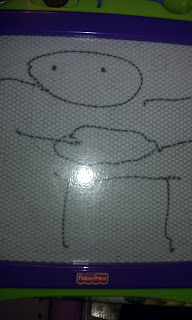 When I asked Alexis why her snowman didn't have a mouth, she responded with "my snowman is angry".  I asked why he was angry.  Her response, "he's too cold". 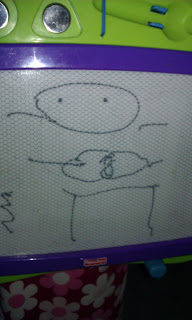 After I photographed her snowman, Alexis realized she forgot to put buttons on him.  I was then instructed to re-photograph the revised snowman.﻿
Posted by Janet at 11:21 AM