A little over a week ago (on Saturday, March 16th, 2013) we took the girls to the mall to see the Easter Bunny.  They were pretty excited to see him.  While prepping the girls that we were going to see the Bunny, Alexis kept telling me that bunnies are not supposed to be inside and that they are supposed to be in the woods.  She was concerned as to why a bunny would be indoors. 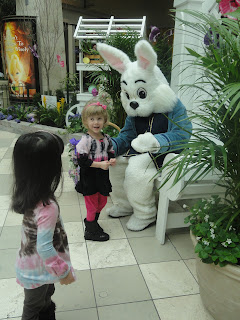 Alexis was slightly apprehensive at first, but she warmed up to him after a couple of minutes.  Surprisingly, Addison went right up to him and started talking. 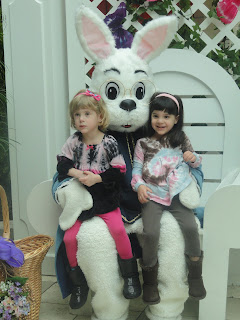 Impossible to get them both to look at the camera and smile at the same time!! 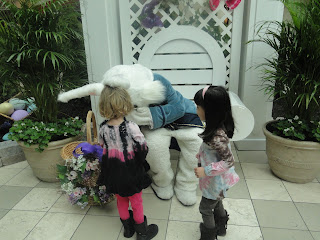 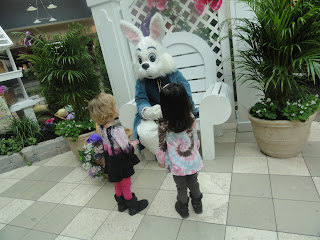 I love this picture!  Even though you can only see their backs, I remember the intense looks of their faces while talking to him. 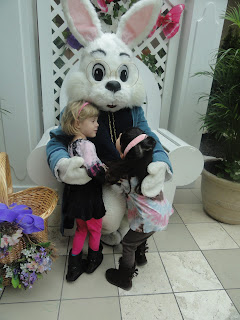 Alexis kept checking him out in great depth.

After leaving the bunny, Alexis told me that she was sure that this was not the "real" Easter bunny.  I asked her what made her think that.  She told me that it was a man in a costume because she could see his eyes.  I love that she tries to analyze everything but I also hate that she is questioning things this early!! 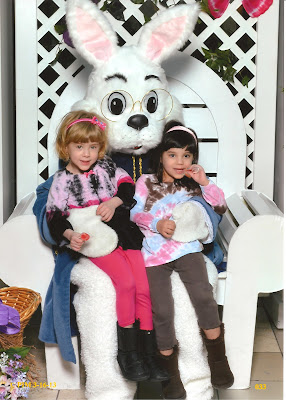 And here is my $18 picture.  In order to be allowed to take my own photos I had to purchase one of theirs.  Kind of a dumb rule but I understand they have to make money too!!

She was also very concerned about the Bunny's need for glasses.  Terry said "maybe he has cataracts".  Alexis responded with "what's a cadillac"?  I intervened and said that maybe he is just tired....reminding them that Mommy wears her glasses when she is tired instead of wearing her contacts.  Once again, for now that answer was sufficient.

Addison really couldn't of cared less about seeing the bunny.  She was more excited about the free sucker.

Stay tuned all week for several more Easter themed posts!!!
Posted by Janet at 9:25 AM