I was finally able to upload my pictures last night.  I'm hoping that by the end of the week, my blog will finally be up to date.  I hate getting so far behind.

We had a great Easter this year.  Just like with every holiday, it is so fun to watch the girls finally understand what it's all about.  A week or so before Easter, I had an impromptu day off work in the middle of the week.  I decided to try and take the girls to the mall to visit the Easter Bunny.  You seriously would of thought that someone was trying to kill my kids by their screams when it was our turn.  They wanted no part of taking a picture with the bunny.  I was a little sad that I didn't get to capture that photo op, but oh well!  We had a great lunch at the food court and played in the play land.

The Saturday prior to Easter weekend we decided to attempt dying eggs with the kiddos.  I boiled 24 eggs.  We ended up with 17 dyed eggs when it was all said and done.  Both girls initially picked up an egg and slammed it into the table, as if they were cracking them.  I guess this is because the only thing they have ever witnessed is me cracking eggs to make them breakfast.  Once we got them to understand that we weren't cracking the eggs, we all had a great time. 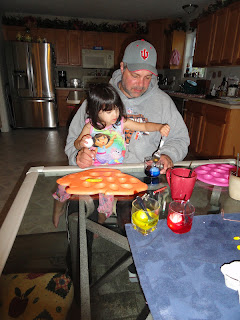 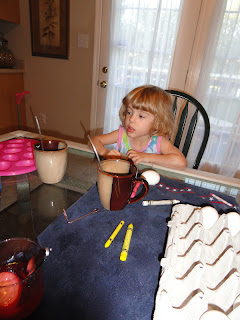 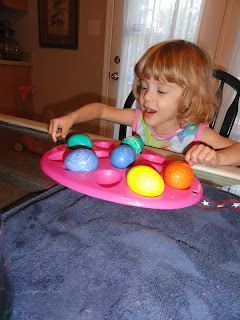 Next Up:  Our subdivision Easter Egg Hunt!
When I tried to explain to the girls that we were going to an Easter egg hunt, I wasn't completely convinced that they actually understood what I was talking about.  When we got to the common area in our neighborhood, the girls wouldn't leave my side.  I'm not sure if this was because they were scared of the commotion going on or if it was because it was still early and a little cold.  Who knows?  But once they blew the whistle, both girls took off!  If Alexis hadn't fallen down and spilled her eggs, she would of won the prize for most eggs. 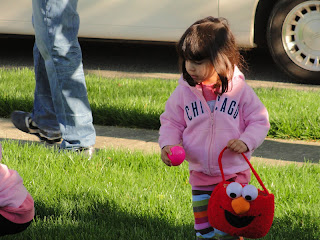 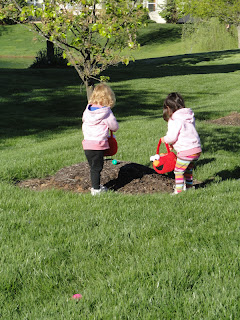 After the egg hunt, they had an Easter Bunny pinata'.  The girls were excited to hit the bunny, until one of the larger kids actually busted it open and its head when flying across the courtyard. Alexis started screaming...."big kid hurt bunny".  I can understand how this was a little traumatic!

Alexis totally into hitting the pinata'. 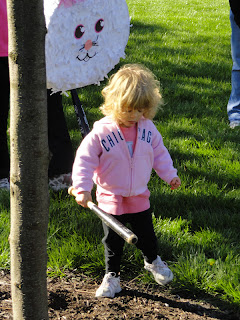 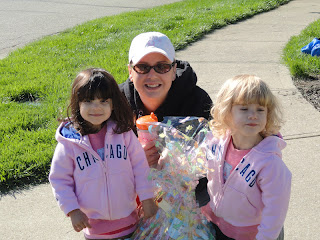 There was also a "guess how many jelly beans are in the jar" game.  Addison guessed 17 and Alexis guessed 23.  So when we turned in their guesses I just added an extra "1" making it 117 & 123.  Addison actually won, with the correct number being 112.  She won a large Easter basket with a bunch of goodies in it.  You can see it in the above picture.
On Easter Day we enjoyed a delicious brunch with Terry's family at a local hotel.  The girls had a great time hanging out with their cousins, the ballon artist and yes......the Easter Bunny!  I was really excited.  When we first got there both girls spotted the Easter Bunny and started to freak out.  But once they saw Daddy and their cousins talking to the Bunny they were totally fine with him.  Go figure!  I was just happy to finally get my picture! 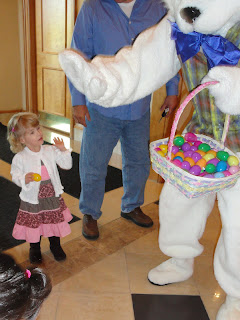 At first, Addison would only give him a high five. 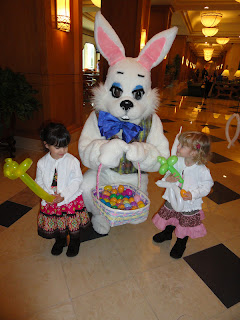 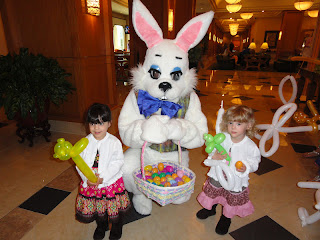 After a little convincing, he turned into a "nice bunny". 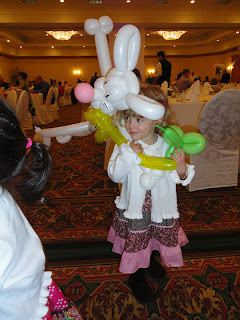 Addison with her balloon.... and everyone elses as well.
After brunch we went back to Terry's parents house for another Easter Egg hunt.  The girls were fired up because now they fully understood the concept.  They couldn't wait to get there.  We had to stall a little driving there because the Easter Bunny needed to make sure everything was in place. (meaning, he didn't want to leave chocolate outside in the sun during brunch) 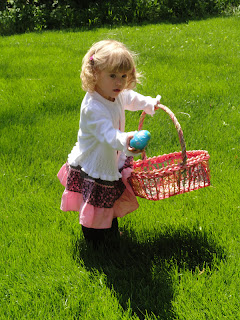 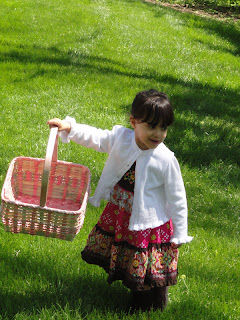 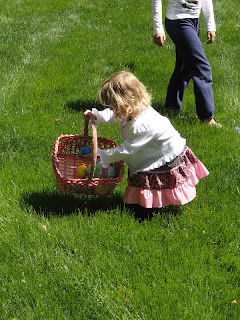 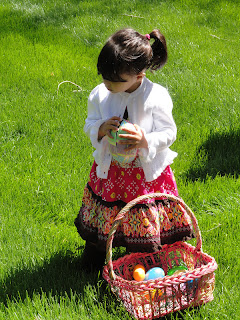 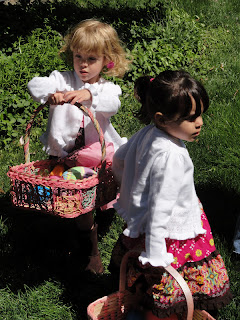 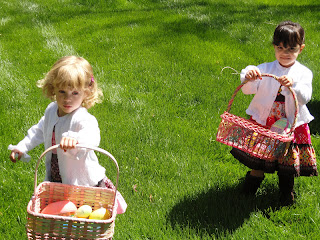 And wouldn't you know it..... Even with all the new toys and candy they got.  Guess what Addison liked playing with best??? 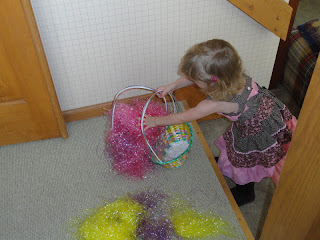 The holidays are so much fun with the girls.
I love watching their little minds work as they start to figure things out.
Stay tuned:  That is if you are still with me.....Birthday party post will be up within the next few days!
Posted by Janet at 11:46 AM

LOVE their dresses! So cute!