Birthday Party Part One!!! (of probably 3)

Let me preface this post by saying I have dreamt about planning the perfect birthday party for my girls since the minute we were allowed to bring them home from the hospital.  I imagined, hoped and prayed that my girls would make it to their first birthday.  Back then, we weren't so sure.  Today we have two beautiful and healthy baby girls.  Not only was this a celebration of their first birthday, but a celebration of making it so far.  Terry and I wanted to have a "surviving the first year" party.  In my mind, I would host the perfect party for my girls.

Just like everything else since we decided to start a family, we were thrown a curve ball with the weather.  My dream of having a beautiful day at the park was crushed.  I was devastated.  I wanted every little detail of their party to be perfection.  I spent hours looking for the perfect ladybug plates, napkins, party favors etc.  Yes, I realize that the girls will have no recollection of their first birthday party, but I felt that it was my duty as their Mommy to make sure that everything was flawless.  Mother Nature decided otherwise.

Ok, ok, I know you have all been waiting for the pictures.  Let me just tell you that thanks to our awesome neighbor Trina, I have a ton of pictures to share.  I felt like I spent all day running around like a chicken with its head cut off.  I only took 80 pictures.  Thanks to Trina for taking all of the pictures that I meant to take!! MWWAAAH!!!  Get ready for a picture overload.  This is why I'm breaking this up into two or three parts.  By the way....If you see your picture posted on here and you don't want it to be, please let me know and I will remove it!  I also can email you copies of any pictures if you would like.  Just let me know! 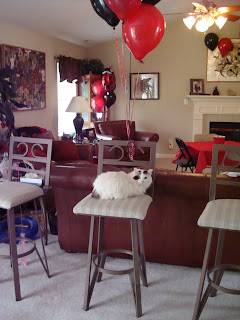 Jynxie decided that she would help supervise the decorating. 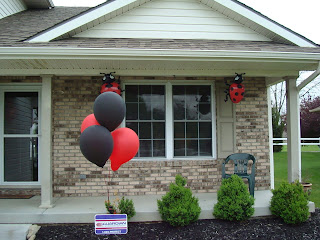 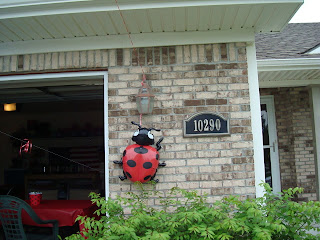 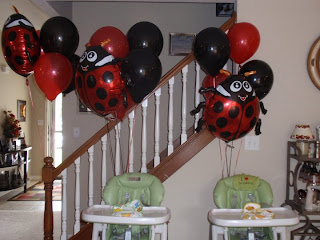 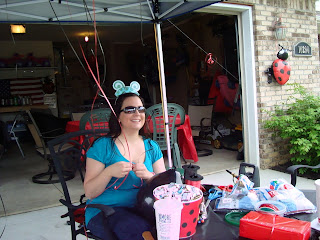 A big thanks to Aunt Sandy (pictured above) and Aunt Paula for helping us decorate!!  Aunt Sandy is also proudly displaying her lady bug party hat/tiara!
The girls got the chance to meet a lot of their family.  We feel very blessed that a lot of our family traveled from as far as five hours away to help us celebrate. 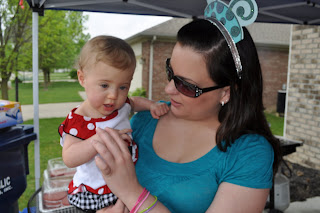 Above:  I think Addison is asking Auntie Sandy why her high chair is in the front yard. 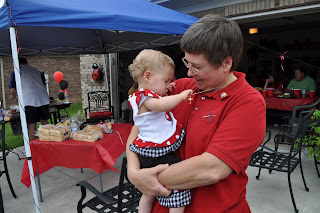 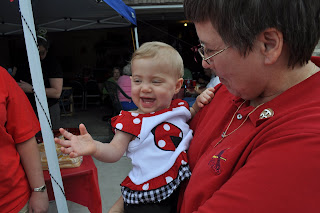 Above two pics:  What's more fun than playing with your Great Aunt's jewelry?  Addison is exploring her Aunt Anna Marie's necklace. And yes, the girls did have lady bug outfits on as well.  You can attend your own birthday party and not be dressed appropriately right? 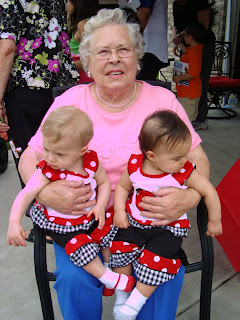 The girls also got to meet their Great Grandma Flanigan.  Sadly this is the best picture that I was able to get of them.  Addison left, Alexis right. 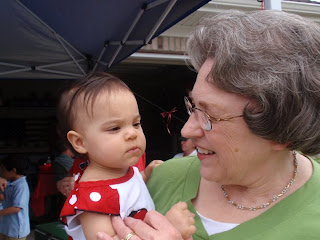 Alexis and her Great Aunt Theresa. 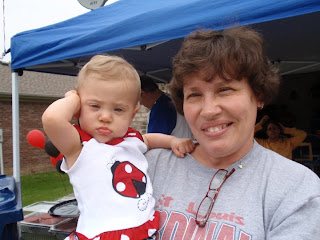 Addison and her Great Aunt Kathy. 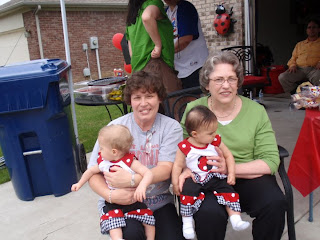 I think the girls were getting tired of taking pictures.  Aunt Kathy left, with Addison and Aunt Theresa right, with Alexis. 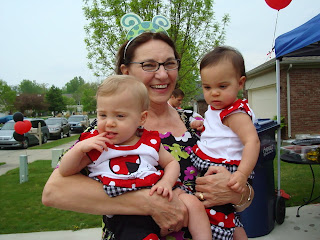 The girls and their Ga Ga.  Addison left, Alexis right. 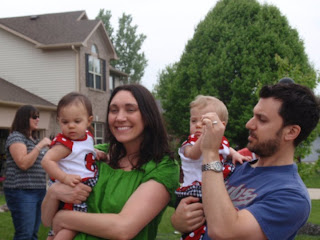 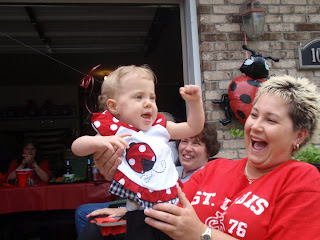 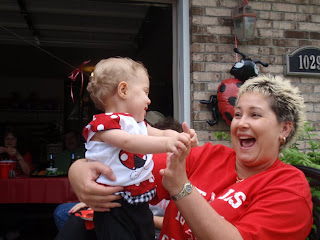 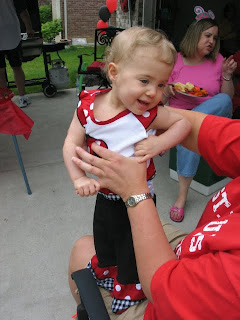 Above three pictures:  I'm not sure what is going on here, but it looks like Addison and her Aunt Paula are having a pretty good time.
Ok, that's all for now.  I promise I will get to the rest as soon as possible.  Between working, taking care of the munchkins and taking care of Terry since his surgery, I've been pretty busy.  Thank goodness my Mom was able to stay and help us out.  Thanks to everyone for your calls, emails and well wishes for Terry's speedy recovery.  He seems to be doing well.  He's still very sore and is really missing being involved with the girls.  I just have to share a real quick story.  When Terry was wheeled into recovery, the anesthiologist, the surgeon, a nurse and two other random people came in to talk to me.  Everyone asked me, "How many kids do you have?"  I thought that this was rather odd, but apparently during Terry's surgery, Terry was constantly talking about his "little girls".  During the surgery, they would knock Terry and out and then bring him to, so that they could ask him questions regarding the placement of the nerve stimulator.  They said that they did this several times.  Just to make sure that he was coherent, they would ask him a random question and Terry would always respond with something regarding his daughters.  I thought that this was very sweet.  My girls are so lucky to have such an amazing Daddy!  I know his surgery has been hard on all of them.
Posted by Janet at 10:30 AM

It looks like you found PERFECT ladybug outfits for the girls - they're adorable! I can't wait to see more pictures. And I love how your husband dotes on his little ladies, even when he's incoherent - I think that's the sweetest thing I've heard in a long time!

Glad your party went well even though the weather didn't cooperate!