What a difference a year makes.... 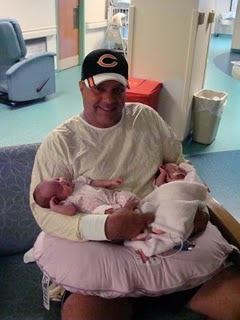 Wow!!  I can't believe that the above picture was taken a year ago.  Man, how things have changed.  This was Terry last year on Father's Day in the NICU.  Alexis (left) had only been home for a few days, and Addison (right) was still perfecting the use of a bottle.  Terry looks a little stiff and uncomfortable in this picture.  Let me say, he is not that anymore!  He is SUPER DAD!!!  The girls are very lucky to have such an amazing Daddy who loves them so much!!
I've been trying to make a card for Terry from the girls.  Unfortunately, our STUPID camera decided to crap out on me again.  Here are the best pictures I could get.  (We have decided on a new camera but every time it goes on sale, it sells out.  I have a rain check to get it, but we are just waiting for it to be back in stock.  I can not wait!!!) 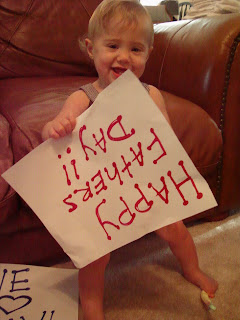 I love this picture of Addison.  If only my stupid camera didn't mess it up! Yes, this is typical Alexis.  Every time she sees the camera she runs.  I guess she doesn't like having her picture taken?  Every time I tried to get her to hold the sign she would put it on her head.  Little Booger!! 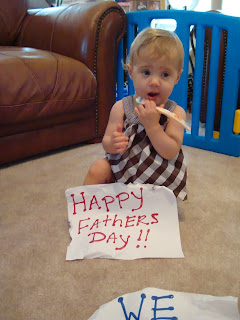 In an attempt to get the girls to sit still, I pulled out their toothbrushes.  It worked for all of about 30 seconds.  Addison determined not to look at the camera! 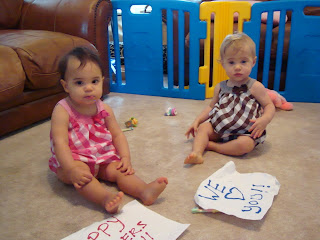 While this is not the best picture in the world, I'm still shocked that I managed to get both girls to sit still and both look at the camera at the same time. 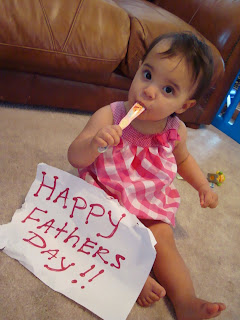 Another toothbrush distraction picture.  Alexis is still learning which end she is supposed to put in her mouth. 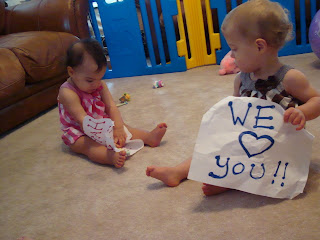 Failed attempt #645 to get a picture of both girls looking at me.  But I still love this picture anyway. 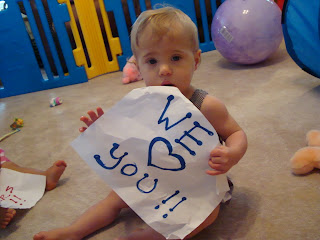 Even though Addison has a blank stare on her face, this is one of my fav's.
I can't say it enough......We are very lucky to have Terry.
It's very apparent that he loves his girls as much as they love him!!  Happy Father's Day Terry!!!
Posted by Janet at 1:12 AM

your blog is gorgeous..The colors are great. I am going to have to steal your idea and do the sign thing for special events..what a brilliant idea. I am visiting from the mott multiples facebook page. I am now a follower and I want to thank you for your contributions to the page. Will be keeping up with you.