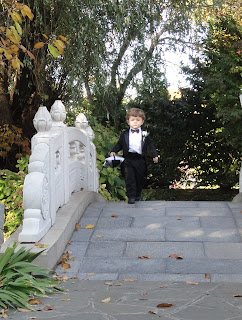 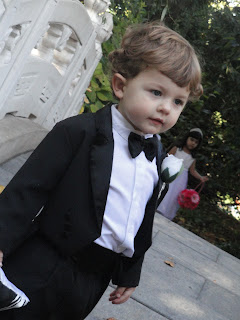 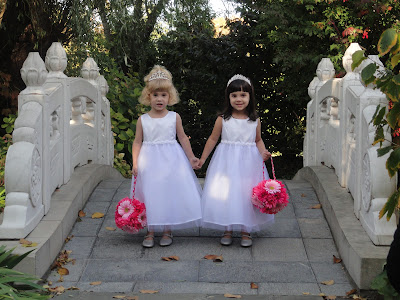 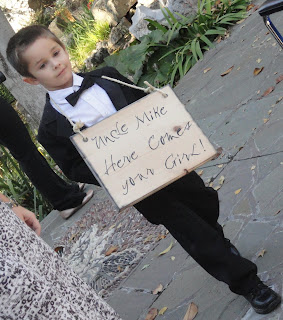 My nephew Connor...Love this sign idea!  Although I think the rope started hurting Connor's neck after awhile. 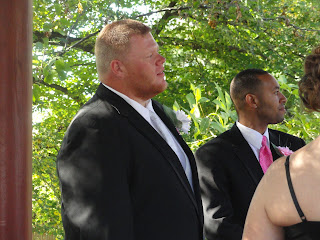 Mike seeing Sandy for the first time coming around the corner. 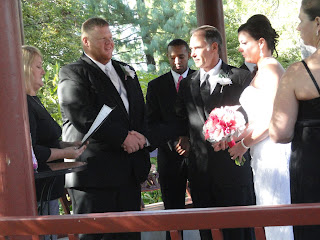 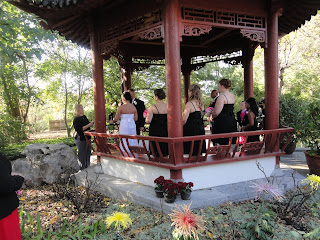 The entire wedding party, minus the kiddos, in the gazebo at the Chinese garden. 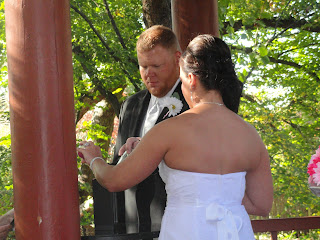 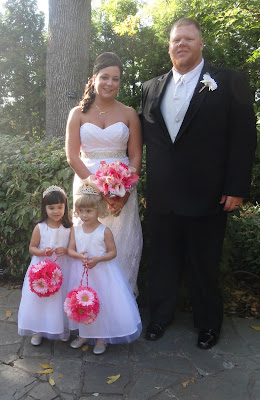 My kiddos with the bride and groom. 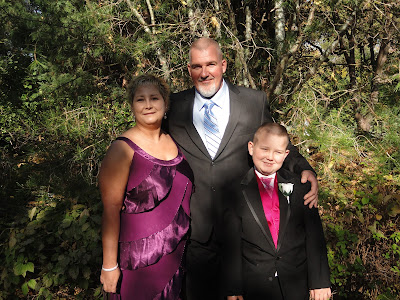 My big sister Paula, her hubby Andy and their adorable son Luke. 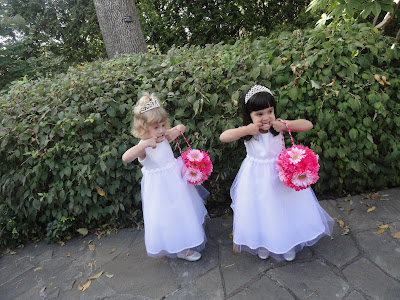 Remember the last photo I posted in Part one???  I wonder where my kiddos get the idea to make funny faces from??? 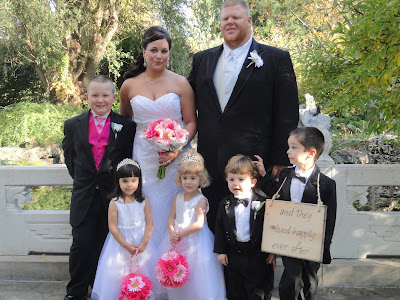 The bride and groom with the kiddos in the wedding party.
Notice the other side of the sign says "and they lived happily ever after". 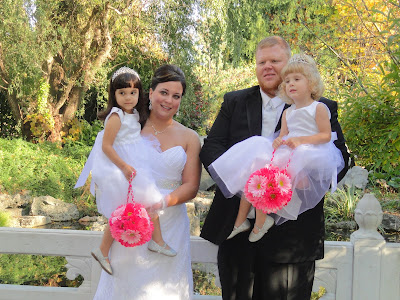 My kiddos with the bride and groom again. 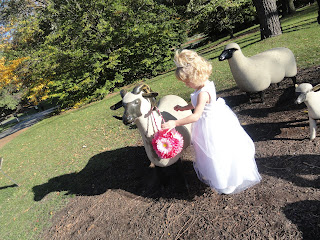 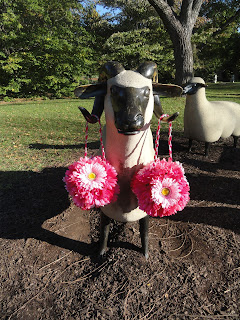 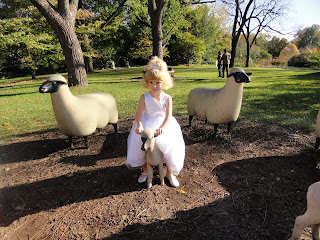 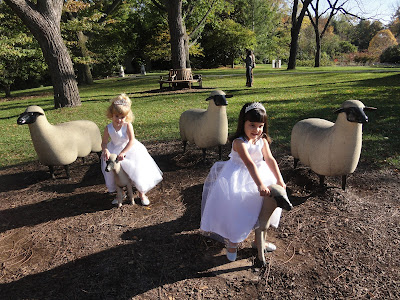 In the middle of the botanical gardens are these six random sheep.  While working on this blog I tried to google the meaning behind these sheep, but was unsuccessful.  Anyway, the girls thought that these sheep were pretty cool.  The night of the rehearsal dinner it was fairly chilly.  The girls wanted to play on the sheep then.  I told them that they could play with them the next day.  They didn't let me forget.  Since it was a BEAUTIFUL day, (they seriously could not of asked for better weather) we let the girls play on the sheep afer the ceremony.

Notice the picture of the flower balls hanging from the sheeps horns. This was Addison's idea.  Kuddos to whomever came up with the idea of the flower balls.  Even though the botanical gardens would not allow them to throw flower petals, I think this was easier all the way around. 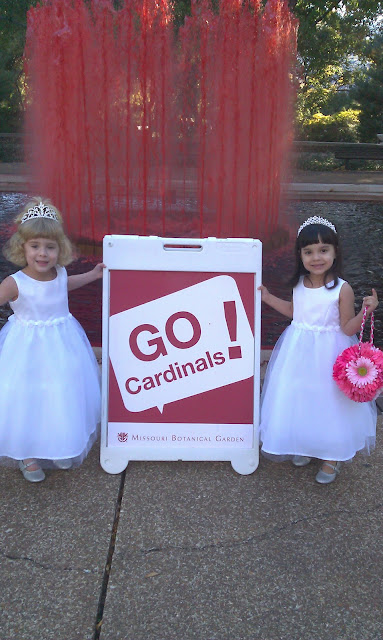 One of my favs....Since at the time of the wedding the Cardinals were in the playoffs, the fountain at the botanical gardens were dyed red.  My girlies were seriously intrigued with the red fountain. 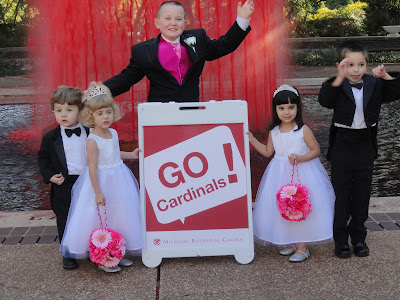 Attempt at a group photo. 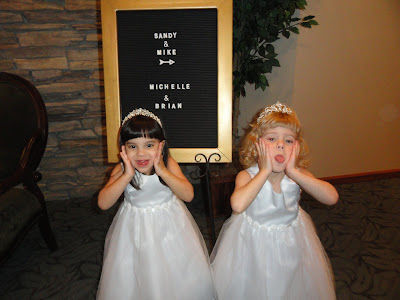 Again...Making silly faces is kind of a family thing!  This was an attempt to get them to pose for a photo in from of the sign at the reception.  They were tired and crabby at this point.  Allowing them to make a goofy face was the only way I was going to get this photo. 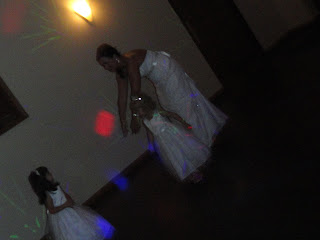 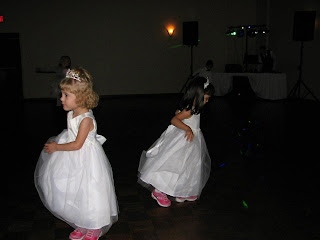 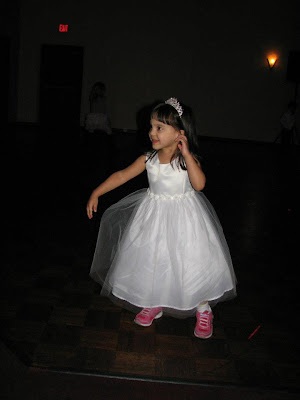 Dancing!  Or should I say spinning?  The girls were literally spinning around in circles on the dance floor.

Again, If you have a weak stomach skip to the next photo....
A little after 10:00p.m. we decided that the girls were about to crash.  I decided we better leave before they had a melt down.  Moments after we got into the car Alexis looks at me and says, "Mommy I dance too much".  I asked her if she had fun and if she was tired.  She responds with "I spin too much, I gonna puke".  I had about 5 seconds to grab the bowl we keep in the car for such situations.   Let me just tell you....the red velvet cake was more red coming up than it was when she ate it. 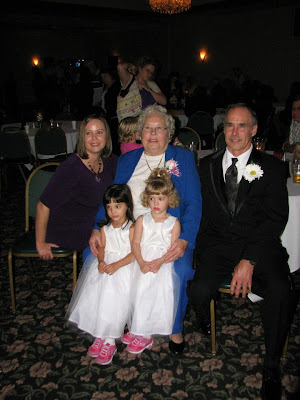 Right before we left, I wanted to try and get some "generation photos".  It didn't happen with both sides of my family.  We were able to get one with my Dad's side.  Four generations....My Grandma, My Dad, Me and My Munchkins!  Not the best photo in the world but it serves its purpose.  As you can see, my kiddos were minutes from a meltdown.

The wedding was seriously beautiful.  I was skeptical of the weather forecast but it turned out to be an absolutely gorgeous day!  Congratulations to my baby sister Sandy and my new brother in law, Mike!!!
Posted by Janet at 3:58 PM

Your girls made beautiful flower girls!