In the past few weeks my munchkins have become OBSESSED with Monsters, Inc.  I'm not really sure why by they can not wait until the opening of the new movie....  Monsters University.
I randomly ran across an advertisement in a magazine for a "build and grow" event at Lowe's.  Probably due to the fact that I don't have boys, I was unaware that Lowe's hosted such things for kids.  I signed the kids up without hesitation.  They were excited to build something by themselves. 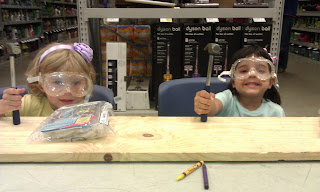 Somehow wearing protective glasses and holding a child size hammer made this super exciting for them.  I'm not sure the glasses were necessary, probably just some type of liability formality.
Apparently this was the first build and grow event that our local store has hosted.  The leadership was definitely lacking.  We were basically handed our kits and hammers and told to have fun.  I'm glad that I didn't send Terry by himself with the girls, as originally planned.  This definitely required adult help.  I struggled to put it together, I'm not sure how a four year old was ever supposed to figure it out.  Regardless, the girls had a great time hammering a random nail here and there and helping to build their "scarers". 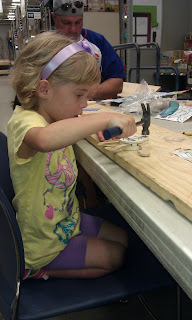 She was so intense it was actually comical.  So focused on making sure everything was perfect.  Not sure where she gets that from.... 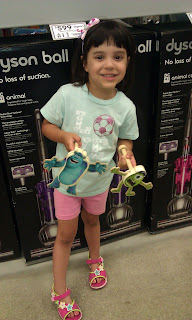 Alexis posing with her scarers....that they now refer to as Monster Puppets. 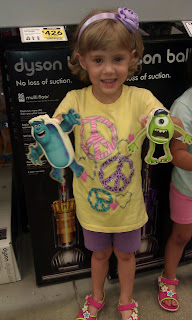 Addison so proud of her creations. 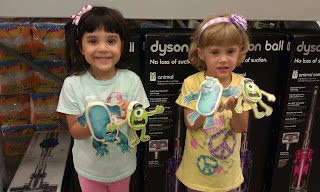 My munchkins.
Regardless, all and all it was a pretty cute little free event for kids.  We plan on attending the next one in a couple of weeks.  The girls just can't get enough of Mike Wazowski!