Ok, so I'm sorry about my vent yesterday but I'm really getting exhausted with dealing with bills every day. Here is what is going on with our girls lately.....

It seems like our doctor's appointments have drastically slowed down!! We no longer are required to go into the pediatricians office every week for weight checks and Addison no longer has to have follow up head scans. So basically now, we just have to go in for routine check-ups. The next time the girls go back to the doctor will be for their 6 month shots.

The girls started eating cereal last Friday. (video to come soon!) The first attempt was very messy and the girls were not quite sure what to make of it. Every day it gets easier and easier. They are figuring out that they need to start thinking about chewing as opposed to just sucking on the nipple of a bottle to get their milk. They really only get a few spoonfuls of cereal every night but man, it makes a huge difference in how they sleep (see below q & a about their sleeping habits). All and all, not much news to report. In my opinion, not having much to write about is a good thing! It seems like the last 5 1/2 months have flown by and due to the chaotic amount of doctors appointments we had I haven't had much time to just stop and enjoy my little ones.

Ok, so now onto the Q & A portion of this posting:

Did you ever find out if the girls are identical?
I know I've answered this before, but this is a constant question that we receive all the time.  The answer is yes & no.  The placentas were tested after birth.  I delivered 3 babies and our third daughter Hope, is now an Angel in heaven looking down & protecting her sisters.  We know that two of our girls were identical.  We don't know which two.  The cost to have the testing done far outweighs our desire to find out for sure.  I would guess that Addison & Alexis are not identical.  But then again, there are some days that I'm not sure.  Every day they look more and more alike.  So who knows?

Why are collection agencies calling you if you have set up payment plans with them?
This is a good question!!  The call I received yesterday....She told me that all medical bills are due within 120 days of the date of service, regardless of whether or not you have set up payment arrangements.  I know this is wrong!!  I will once again be on the phone today trying to straighten things out.  I think they just like to harass people, which is truly wrong!!  It's not like we are deadbeats trying to ignore our obligations to pay.

Why are you making your blog private?
Ok, so after many emails from family & friends....I've decided to not make my blog private, but you will have to be a follower to post a comment from now on.  While I'm tired of all the spam and phising comments I receive, it just makes sense to leave it public.  With the exception of my mother/father in law & my brother/sister in law, all of our relatives live over 200 miles away.  Our blog is a way for everyone to keep up to date on the girls.  Several of our relatives are "technologically challenged" and can not figure out how to become a follower.  For now, I will just leave it public but tighten up the guidelines for posting comments.  Hopefully that will help!  And NO, this is not a result of the Pampers lady!  :-)

How are your friend Jody's boys doing?
I've been meaning to post an update on this but haven't.  They seem to be doing well.  David is still requiring the use of oxygen, but hasn't had any major episodes recently.  Both boys are getting big and are weighing in around 8 pounds.  While I understand the stress the NICU journey is, I can't even begin to fathom the stress that Jody & John have gone through since they have been home.  Please keep them in your prayers. Again, I hope Jody doesn't mind, but I snagged one of the most recent pics of her boys from her website. 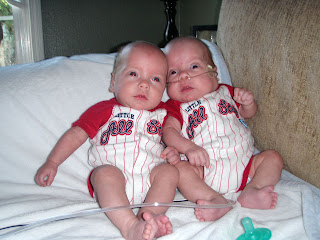 How do you and Terry maintain your marriage with having two infants?
I do NOW understand the stress that having multiples places on a marriage.  I always thought the statistic that said "60% of married couples who have multiples will be divorced before the children are 10", was stupid.  I now understand why this is true.  Terry and I have made it a point to set aside at least 15 minutes a day to spend together, alone without the kiddos, usually after they go to bed.  This may not seem like much but it makes a big difference.  There were several days where we would just pass each other in the hallway and our only conversations were about who pooped and who didn't poop.  We make an attempt everyday to discuss things other than the girls.  While this is hard because our lives now revolve around them, it's also important for us to maintain our own identities.  Our 15 minutes require the TV to be off, no texts, no phone calls & no computer.  We also try to get away for a "date night" at least once a month.  This has been more challenging, but we still try.

So, I think that is all for now....If you have a question that I didn't cover....feel free to leave me a comment and I will do my best to answer them in a later post.  Thanks for reading!!!  (I hope to have more pictures up soon!)
Posted by Janet at 10:32 AM

Are the phishers able to get past the word verification? Sorry you've been bugged by people like that. While I'm not a "follower" per se, I do have you in my reader and keep up with you and the girls. I don't often comment but enjoy the updates.

Thanks for requesting the prayers, lord knows we need it!!! I so look forward to having your sleep schedule and totally agree on the 15 minutes w/ the hubby, even if it is just to cry. Jody