We finally broke down and installed the girls forward facing car seats Wednesday evening.  We have been going back and forth on this issue for a month or so.  Indiana state law (as well as most other states) dictates the rule for forward facing seats is one year of age AND 20-22 pounds.  While our girls are very tall and their legs were scrunched up in their infant carriers, they previously didn't meet the 20 pound weight requirement to flip them around.  Every time that we would go somewhere, Terry and I would feel bad putting them in their infant car seats with their long legs pressed up against the back of the seat but we knew that they would be the safest in a rear-facing seat until they hit the weight requirement.

After much discussion, and after cleaning up several vomit incidents from Miss Addison, we decided to flip them around.  While I don't know what the girls current weights are, I'm positive that Alexis definitely meets the 20 pound requirement.  Addison is very close if she is not 20 pounds.  We decided that even if Addison isn't quite 20 pounds, that she will be more comfortable facing forward and we are hoping that her car sickness issues will be eliminated by making the switch.

When I was a child I remember numerous occasions where I would need the "bucket" when we were in the car.  Yes, the "bucket" was nothing more than an old plastic butter bowl, but it served the purpose during those road trips to Grandma's house when I got car sick.  I have a vague recollection of standing on the side of Highway 55 while my parents would clean up the car & dispose of the "bucket" so we could return home.  I hope that Addison does not acquire my tendencies towards getting car sick, but as it looks now, this may be wishful thinking on my part.

The girls were ecstatic about their new "big girl" seats.  I really wish that I would have taken a video of this, but who knew that new car seats would be so exciting to my kiddos?  It was if they were seeing the outside world for the first time and they were getting a whole new perspective on life by simply being able to see out a window.  They both loved the fact that they could not only see Mommy in the car, but that they could see each other.  Their eyes were both very wide with excitement and their little giggles were very contagious.

I can't believe how big my little girls look in these pictures!!  They seem to be growing so fast lately!  Please forgive the quality of the pictures, they were taken from my phone.  (Addison on top, Alexis on bottom) 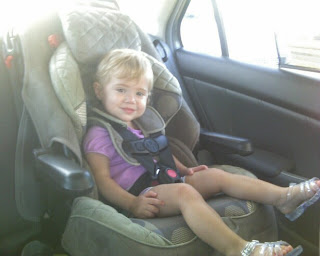 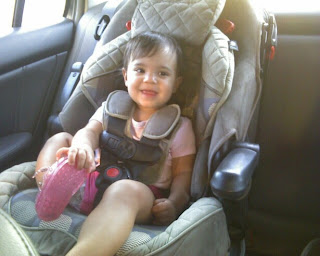 It is funny how excited they get when you turn them around! Chloe Jo couldn't contain her excitement. Your girls are looking so much more little girl like than baby like these days.

WOW! You are right. They definitely look like little girls here and not babies. They are so dang cute!

Time does go so fast, and they do look so big! I remember when Lilla got her big girl car seat, she was absolutely in love with that thing! Anna was so much happier turned around too, she was ecstatic to get it. Glad they are having fun with it! Oh, and hope you don't need any "buckets" anytime soon!

They look so grown up!