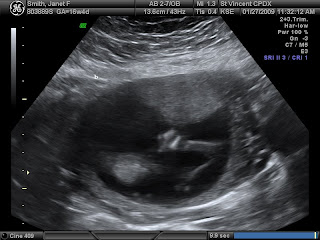 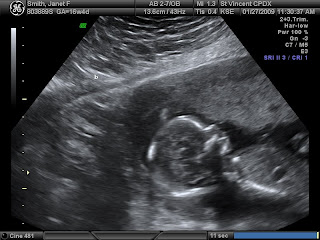 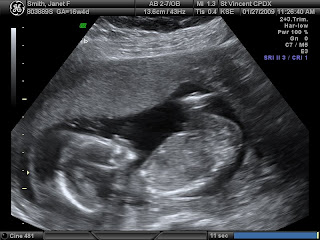 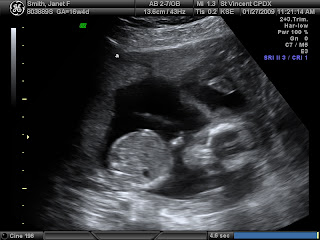 Well, our ultrasound technician today said that she is 90-95% sure that we are having two girls!!! My mother-in-law is not convinced, but 95% is good enough from me!
All in all, everything looks good, but Baby B has a small situation. She has what is called choroid plexus cysts on her brain. I know... You are asking yourself what the heck is a choroid plexus cyst. According to my informational brochure this is verbatim what it says:
A "choroid plexus" is a structure found inside the brain. There are two on either side of the brain. A choroid plexus makes the fluid that bathes the spinal cord and brain. Sometimes a fluid-filled area called a "cyst" forms inside the choroid plexus and is called a "choroid plexus cyst" or "CPC". Sometimes only one choroid plexus cyst is seen and sometimes more are seen. Also, choroid plexus cysts may come in different sizes. Regardless, most choroid plexus cysts disappear by the third trimester of pregnancy. It is thought that about 1% to 2% of babies have CPC identified during prenatal ultrasounds. Usually these cysts DO NOT cause problems with the baby's health including no effect on brain function. These cysts are usually normal variations in anatomy. It is scary to hear the words cyst and brain when referring to your baby, but please remember that the cysts themselves do not cause problems for the baby. As a matter of fact, on autopsies done on humans, many choroid plexus cysts are found. This means that at any given time in our life, we may also have a choroid plexus cyst that comes and goes. Now, you may be wondering why you are even told about these cysts. It is thought that, rarely, babies with CPC may have chromosome problems. Because of this association, it is important for you to be informed of the cysts and of your options for prenatal testing.
Ok, so that's what a CPC is. Having further testing done (ie. an amniocentesis) is very risky with a multiple pregnancy. We have opted to wait until our next appointment (February 17th) and re-evaluate the situation at that point. There is nothing that can be done to treat CPC, so we have just decided that at this point we are placing it into God's hands and we trust that he will help guide us into making the right decisions.
Posted by Janet at 12:53 PM

Congrats on your two little girls!

I hope the CPC does turn out to be nothing to worry about.

Good luck at your next appointment.