I gotta say I'm totally loving this time of year.  Last year the girls understood Christmas, but I don't think they fully 100% comprehended everything.  This year, they are all in!  It makes my heart smile watching them enjoy the holidays.....from looking for Christmas lights, to finding Joe (our Christmas Elf) every morning; I'm loving it!!

Last Saturday afternoon, we put up the tree.  The girls were ecstatic.  They couldn't of been more excited.  Here are a few photos: 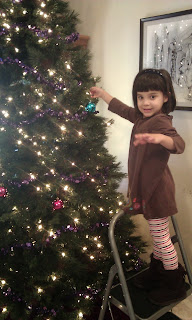 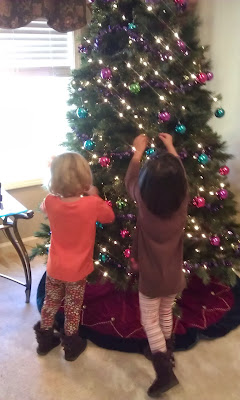 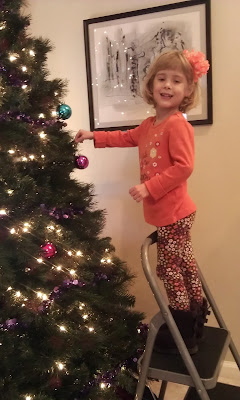 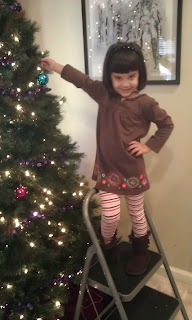 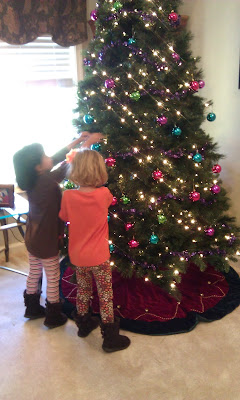 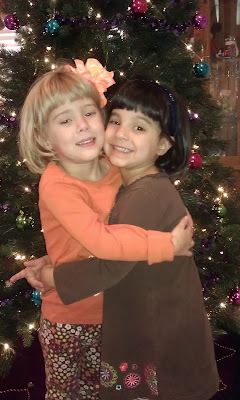 Joe (our elf on the shelf) also made his first appearance of the season Sunday evening.  The girls found Joe upstairs sleeping in my bed.  (I didn't want to hide him in their room, for fear I would wake them up trying to move him later in the evening)
We read the book that accompanies the elf.  Afterwards I'm fairly certain that I fielded close to 800 questions from the girls....mostly Addison.  She asked me why the book says he flies back to the North Pole using magic, but he doesn't have wings to fly or a magic wand. I asked her how Spider-Man flies because he doesn't have wings. I was then schooled that he doesn't fly.  He swings from web to web. Superman has a cape that he uses to fly. I told them maybe the elf has a cape he puts on every night. Then she wanted to know where he keeps the cape during the day.
Alexis was concerned about the fact that Joe was sleeping in my bed.  If you are not familiar with the rules of the Elf.....you are not allowed to touch the elf or he loses his magic.  Alexis told me I should probably sleep on the couch so I wouldn't touch him.  I told her that I still needed to finish up the laundry and I wanted to take a bath before I went to bed.  I was able to convince them that if they went so sleep right away Joe would be able to fly back to Santa and I would be able to sleep in my bed.  Once I closed their bedroom door, I didn't hear another peep the entire night.  (Usually they talk and sing for 15-20 minutes before calming down for the night).  Love that elf!!
Posted by Janet at 9:33 AM