Finally my Christmas post! WARNING: This is SUPER LONG!!!!!

So I'm finally finished with our play by play of our First Officially Christmas as a family!! Our day was very overwhelming for both Terry & I as well as for the girls. If I could have changed any of it, the only thing I would change is the fact I didn't have the opportunity to take as many pictures or as much video as I would have liked. But other than that, I was a great Christmas!! I'm warning you in advance that this is super long. I use my blog as my own personal diary so I tend to over describe things sometimes.

We started on Christmas Eve with the girls opening up Terry's gifts from me. We decided to scale things down a bit this year due to financial issues but we still got each other little gifts. The girls were totally into ripping the paper to shreds! They were giggling and laughing while chewing on the wrapping paper. Alexis somehow found a way to use the boxes as things she could climb upon. She's a beast. We bathed the girls which they now love, thank goodness, and we all went to bed early because we knew we had a long day ahead of us.

Christmas day started like any usual day. I got up around 6:30, showered and got ready. I woke up Terry when I was done so he could also shower. We proceeded to get the girls dressed, fed & ready to head to Ga Ga and Pop Pop's house. (AKA Terry's parent's house) We opted to fore go the fancy Christmas dresses that we used for the pictures, since the girls hated the tights and they literally hate being in those dresses in general. Mine and Terry's new motto is "the simpler the better." So we went with the Christmas onesies and pants. The girls had breakfast, watched a little of their Baby First TV show and we packed up to head to Grandma's around 9:15ish. This was the first time that I had to use two diaper bags to take along everything we needed. I literally had been planning this trip for a week making sure that we didn't forget anything. I had lists going like crazy. You would think we were going on a major road trip when literally we were going 15 minutes down the street. I'm slightly OCD and I needed to make sure that all things were going to run smoothly. This entailed the packing of the presents in the car, the highchair, the food, the kids, etc.

We got to Ga Ga's house and unloaded the kids and the car, and we set up shop in the corner of their living room. Terry & I had a quick apple turn over and a glass of hot apple cider before the present madness commenced. This is one of the things I wished I had taken more pictures of. The girls had a mound of present surrounding them in the corner of the living room. I'm literally not exaggerating. There were probably close to 35 wrapped gifts that just circled them on the floor. Needless to say, not only was I overwhelmed but so were the girls. 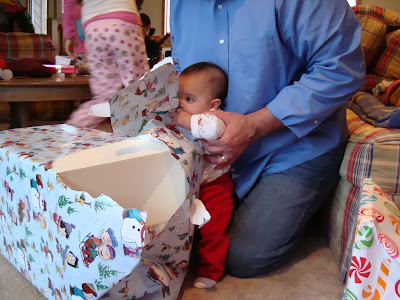 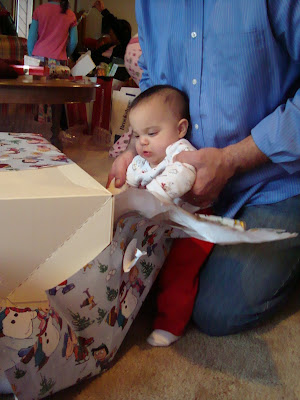 Above two pictures: you can see Alexis digging into the wrapping paper. She was having the time of her life ripping the paper and tearing up things. We eventually had to stop her because it became more of a tear a piece of paper and then put it in her mouth routine. 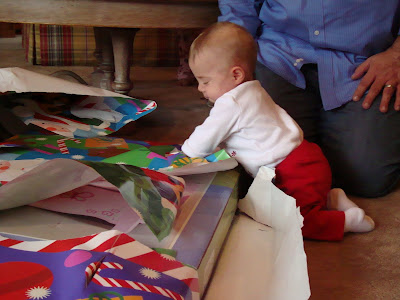 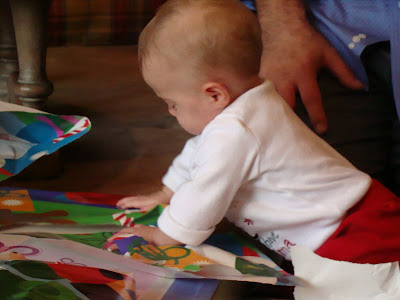 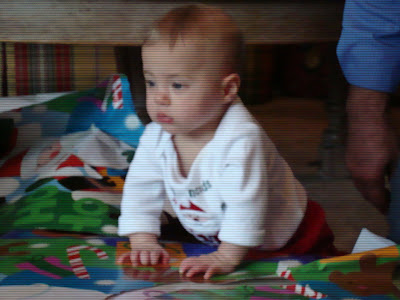 The above three pictures are Addison opening her gifts. She was a little bit more delicate about it than Alexis, but she also enjoyed tearing things up. I love the last picture and I'm bummed that it didn't turn out better because this was Addison all day long. She would just look around and check everything out. It was like she was just taking everything in and couldn't believe what was going on. I know she was just overwhelmed but watching her take in the surroundings was literally priceless.
After gifts comes lottery and cheese time. Yes, this sounds like a weird combo doesn't it? Everyone gets lottery tickets in their stockings. We gather around the kitchen table, scratch our tickets and have cheeses, brie's, pate's and crackers. Terry and I took turns monitoring the kiddos while the other would scratch their tickets. I fed the girls their lunch in a quiet hallway of the house so the girls could focus on eating instead of the madness and Terry did his lotto tickets. Then Terry gave the girls their bottles while I did my lotto tickets. Terry was the big winner in the family this year! He won $500 on one individual ticket!! His total winnings were $573. I did fairly well with winnings of $76. Neither of the girls won anything on their ticket.

The girls went down for a short nap and Terry and I finished opening what presents the girls didn't finish. Let's just say the girls did very well for their first Christmas. They got lots of clothes, hair accessories, toys, a new toy box and they each got their first American Girl doll. Terry and I had to have a conversation about the American Girl fascination. As a new daddy, Terry was not familiar with A.G. Terry wanted to open the boxes and let the girls play with their new baby dolls. After explaining to Terry what A.G. is we decided that the dolls will be put on a shelf in the girl's closet until they are old enough to understand what they are. They have several other baby dolls that they can abuse right now. I think we've opted to return quite a few of their gifts and place the money into their college savings account. The girls are still too young to understand Christmas, and they have more than enough toys already. We don't want our girls to grow up spoiled and with a sense of entitlement so we have decided to pick two new toys for each girl and to return the rest of them. Trust me, they have SO many toys right now, they won't even know! Once the girls are old enough to understand the meaning of Christmas things will be different but for now it was just excess. Not that it isn't appreciated by any means! 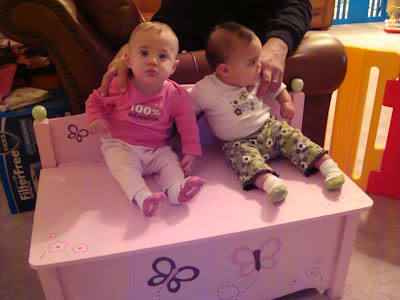 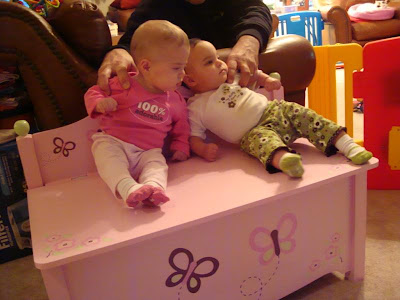 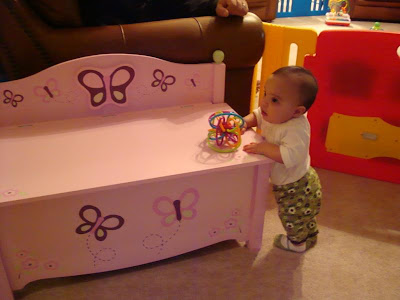 Above three pictures: The girls with their new toy box. Terry accomplished several things on his "to do" list over the weekend and one of them was putting together the girls new toy box that Santa Ga brought them. Alexis refused to sit and pose for a picture on the box. She wouldn't look at the camera nor would she sit up. I think her favorite thing about the toy box is it gives her something else that she can use to climb up on to stand up. (see bottom pic) The girls are also wearing their new Mary Jane socks. It may be a little hard to see them in the pictures though.

One of the girls new toys (you can see it in the bottom picture on top of the toy box) is a Winkel Color Burst toy by Manhattan Toys. They absolutely LOVE this!! I have added a picture of it below, although ours is different colors. I can't tell you how much they love this! They will literally fight over it. Each girl grasping a loop and pulling to see who is the strongest. It's like their own little mini version of tug of war. This toy has also been flung across our living room on numerous occasions as Alexis gets super excited about playing with it. She will start waving her arms with it in her hand and then it flies across the room. It's still funny right now, until something gets broken. 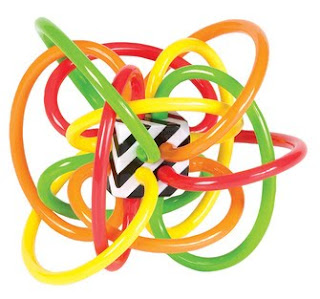 So to finish up Christmas day, Terry and I loaded the girls up and went back home. The remainder of the family was going over to his brother's house but we decided that the girls really couldn't handle anymore excitement. See below picture of Addison: She just couldn't take any more and pooped out shortly after we got home. 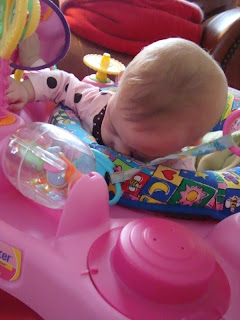 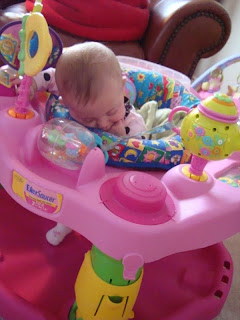 Terry and I went home, played with the girls for a little bit and then put them to bed. Terry and I ordered Chinese food for dinner and we enjoyed a nice evening of sitting on the couch reflecting about the day. We feel so fortunate to be experiencing all these little milestones one by one.
One of my favorite parts of the weekend was making the girls first ornaments. This did not go as well as I had planned or did they turn out flawlessly but they will make the perfect keepsake. I decided that I wanted to make plaster handprint ornaments. I plan on doing this every year with the girls. Hopefully as they get older this will go more smoothly. Alexis decided that instead of giving me an impression of her hand that she would just dig her fingers into the plaster and squeeze it through her little fingers. I had to do her impression several times before I got one that resembled a hand. Addison did not enjoy this process at all. She didn't like getting her hands dirty or the way the plaster felt. Hers did turn out a little better but overall I'm fairly satisfied with the results. It will be fun to pull these out of the box every year and reminisce about the fun that we had creating them. 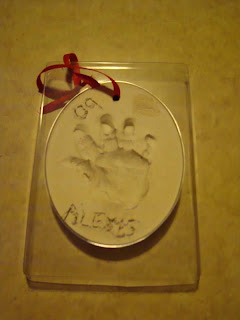 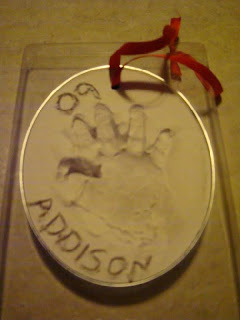 So I think that is the extent of my Christmas Post. I feel like I'm forgetting something pretty major?? Who knows? If I remember I will post it later. I'm still trying to figure out how to get the videos off the video camera. I can do it from my digital camera but not from our actual video camera?? Once I figure it out I will post those.
Hope you all had as enjoyable of a holiday as we did! This definitely will be one that we won't forget!!  Thanks to all of our family who made our first official family Christmas unforgettable!
Posted by Janet at 2:41 PM

First off, where do you guys buy your lottery tickets? I never win anything!! heheh

The ornaments are cute and the photos are priceless! Thanks for sharing..