On Tuesday, April 23rd, 2013 the kiddos had their 4 year old well check-ups at the pediatricians office.  Their doctor was very impressed with their progress and couldn't believe how well they are doing.  Both my kiddos finally are on the growth charts.....just barely, but they finally are starting to catch up. 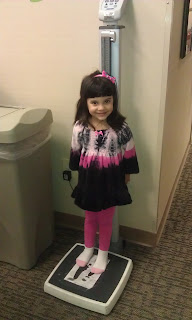 My little peanut weighed in at 30.8 pounds.
Quite a ways from her 2 pound 2 ounce birth weight!!! 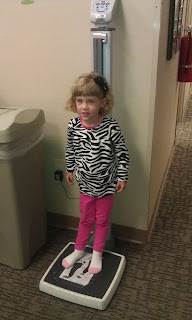 My sunshine weighed in at 29 pounds even.
A big change from her 1 pound 15 ounces weight at birth!!! 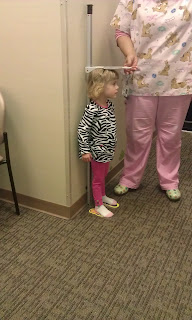 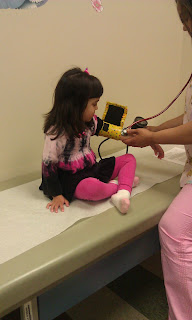 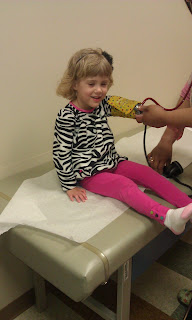 Getting their muscles measured.....
Also known as having their blood pressure checked. 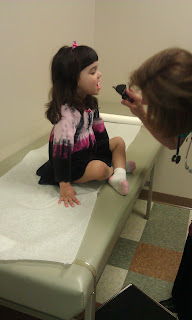 It's always so incredible seeing their progress in the grand scheme of things.  I love our pediatrician office!  Everyone there is always so friendly and accommodating.

The girls did receive three shots each during this visit.  I completely expected full on sob fests from both of them.  We had Addison go first.  She is my big baby.  I knew if she saw Alexis get her shots she wouldn't want any part of it.

Addison got two shots in her left leg before she even realized what was going on.  I was holding her and Terry was distracting her.  Nurse Michelle was so quick that she barely noticed.  The third shot stung a little she yelled "ouch" and that was the extent of it.

Alexis hopped up on the table and also took her three shots like a pro.  The first two went off without a hitch.  The third made her yelp a little, but there were no tears from either of my kiddos.  I will admit, I did have a few tears myself.  It's always difficult for me to hold down my girls when I know something might inflict pain upon them.  I was seriously impressed with the fact that neither of my kiddos were really phased by the immunizations.  I honestly expected screaming, kicking and a massive breakdowns.  My girls never cease to amaze me.  I couldn't be more proud of my big girls!!
Posted by Janet at 10:59 AM