Last Saturday as I was taking the girls to story time at the library, I noticed that our local police station was having an open house later in the day. (The police station is next to the library)  I thought this would be a fun activity for the girls, plus we also needed to get their "Kid ID Card" made.  I've been meaning to get their cards done for awhile, but it seems like the only time it is available is during the week, and I'm working.

After the library we ran home, had some lunch, grabbed Terry and headed over to the police station.  Terry wasn't very hip on the idea of going.  He thought for sure the kids would be bored out of their mind.  To his surprise, all four of us had a great time.  We spent almost three hours touring the police station, sitting in the police cars, watching the dogs do attack demonstrations, and just having a great time.  What a fantastic event put on by the Fishers Police Station!   Here are a few photos: 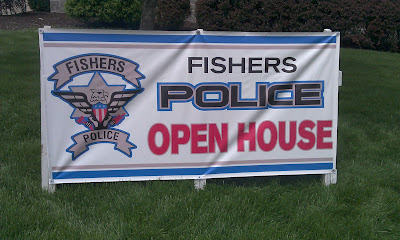 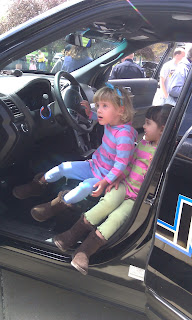 Sitting in the police car.  The police officer told Addison she could honk the horn and turn on the lights.  She didn't believe him.  Alexis was all about turning on the lights and playing with the car. 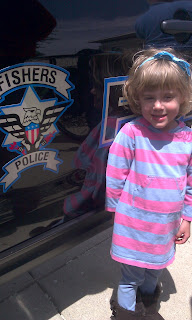 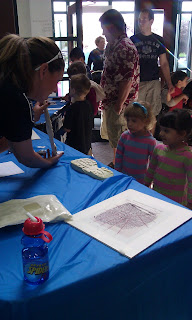 The girls were very intrigued by the female police officer.  Alexis couldn't believe that girls could do that.  She now wants to be a policewoman when she grows up. 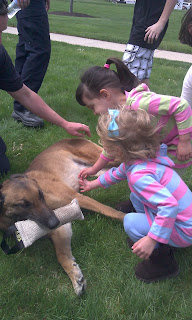 They loved watching the dogs.  Alexis got mad when they had to put the dog away.  This particular dog was pretty wound up after doing an attack demonstration.  For safety reasons, he needed a time out. 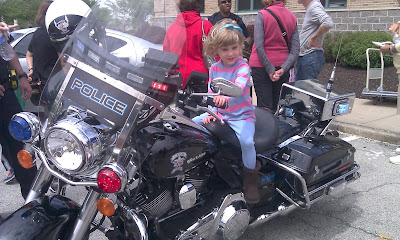 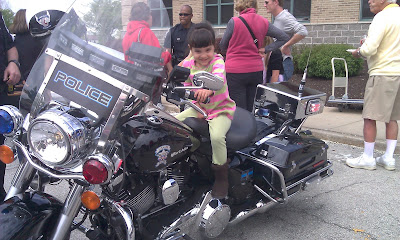 Both girls loved the motorcycles.
Posted by Janet at 10:32 AM

I love Addison's face in the police car. Hilarious!